Irish nun honoured with award for courage in US 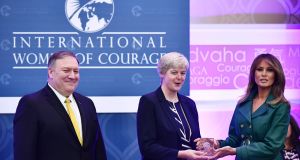 US first lady Melania Trump and US secretary of state Mike Pompeo present the 2019 International Women of Courage award to Sr Orla Treacy during a ceremony at the State Department in Washington, DC. Photograph: Mandel Ngan/AFP/Getty Images

An Irish nun who works in South Sudan was presented with an award for her work by US secretary of state Mike Pompeo and US first lady Melania Trump on Thursday.

Sr Orla Treacy (46) from Bray, Co Wicklow, was one of 10 women given the International Women of Courage Award at the US Department of State in Washington, DC.

Sr Orla was nominated for the prize by the US embassy to the Holy See. The award, in its 13th year, recognises women around the globe who have demonstrated exceptional courage and leadership “often at great personal risk and sacrifice”.

In 2006, she travelled to Sudan with four other Loreto nuns to set up a new mission in the country. Today, she serves as the head administrator of the Loreto Rumbek Mission in Maker Kuei, overseeing a boarding secondary school for girls, a co-educational primary school, and a women and child-centric primary healthcare facility.

In an interview with The Irish Times last year, she described the challenges she and her students face in a country riven by civil war.

“We have been threatened at gunpoint, we have been insulted, all number of problems because she is a woman and should be sacrificed for the sake of the greater good. Technically it’s a boarding school but I call it a women’s refuge because you’re constantly trying to protect these girls from forced marriage.

“I work with people who live very much on the margins: life and death, hunger and despair. Every day they live on the edge. And yet in that you can still glimpse love and hope every day.”

Supreme Court to hear urgent appeal over treatment of profoundly injured child 15:00
Second Covid-19 vaccine could be authorised within ‘days’, says North’s health Minister 14:38
Gardaí should have power to request passcodes for phones and laptops, report says 14:33
Three alleged NI sex offenders who had cases rescinded to be prosecuted again 14:32
Maginnis should be suspended for bullying and harassment, watchdog finds 14:19