Coronavirus: Spain experiments with basic income for most in need 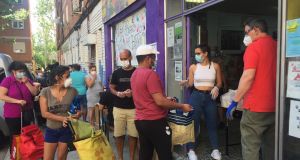 Volunteers hand out food in the Madrid district of Aluche. Photograph: Guy Hedgecoe

It is just after 10am and a queue is forming in a side street in the working-class district of Aluche. Those gathered are waiting to receive bags of donated food from the local neighbourhood association. Many of them have been struggling to make ends meet for some time: they can’t find work, have no job security or simply have too many mouths to feed. Coronavirus has made things even more difficult.

“After 20 years here, this is the first time I’ve had to do this,” says Bayardo Horacio Valverde, an Ecuadorean builder in the queue. “Even during the last [economic] crisis I kept working.”

This food-donation scheme in Aluche began only in April, a few weeks after Spain’s strict lockdown brought much of the economy to a shuddering halt. Thousands of companies have had to lay off staff temporarily, and although the government has agreed to keep paying those workers in the interim, many have no contract to protect their rights.

On Friday the coalition government is due to approve a new initiative that has few precedents in Europe: a guaranteed basic income for those in most desperate need.

The measure will have a modest reach at first, with about 100,000 homes receiving a monthly payment that ranges between €462 and €1,000, depending on the number of children in the family. But it will then be extended and become a financial safety net, the government hopes, for about one million homes.

Socialist prime minister Pedro Sánchez has described it as “a historic measure for our democracy that ensures that nobody is left behind” and is focused on protecting what he calls “the exposed Spain”.

Sánchez points out that this monthly payment was a commitment his government made on taking office in January. But coronavirus has accelerated its introduction.

“It makes economic sense that the government uses public money to help the needy,” says Javier Díaz-Giménez, an economist at IESE business school in Madrid. He says the legacy of the financial crash of just over a decade ago is still visible in Spain.

“Wages as a share of GDP have not recovered their pre-2008 value, so it’s pretty fair to safe that inequality has increased in Spain,” he said. “And clearly the Covid-19 crisis is going to make it much, much worse.”

After a recent visit to the country – before coronavirus had struck – the UN’s special rapporteur on extreme poverty and human rights, Philip Alston, reported that 26 per cent of Spaniards were at risk of poverty or social exclusion. Spain, he said, “needs to take a close look in the mirror”. In a country of 47 million, therefore, the impact of the new basic income will almost certainly be limited.

But while few question the need for measures to help those on the margins of Spain’s economy, the new policy, which is expected to cost about €3 billion per year, has faced some political resistance. Much of it appears to be driven by the fact it has been championed by Pablo Iglesias, a cabinet minister and leader of the leftist Podemos party, the junior partner in the governing coalition.

Some have used it as supposed proof that Iglesias is dragging the government towards Venezuelan-style populism. The far-right Vox party initially claimed basic income was a strategy with which the government sought to keep Spaniards “on our knees, overwhelmed and subsidised”. However, in recent days the party has performed a U-turn, describing it as a “necessary” policy.

Although Spain’s Catholic Church has also expressed misgivings about allowing Spaniards to “live off subsidies” in the long term, the Vatican has voiced support for such policies.

“This could be the moment to consider a universal basic income,” Pope Francis wrote last month.