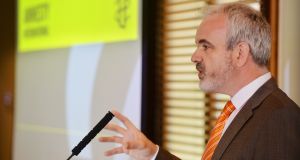 A majority of people would support abortion on demand, a poll commissioned by Amnesty International and published on Wednesday has found.

The Red C Poll of 1,000 adults, conducted by telephone between October 16th and 19th, found that 60 per cent of people believe women should have abortion on demand, either outright or within gestational limits.

It found that a large majority want women and girls to have access to abortion when their health is at risk (89 per cent), when pregnant as a result of rape (85 per cent) or where there is a diagnosis of a fatal foetal abnormality (81 per cent).

A majority also favour access to abortion where there is a diagnosis of a serious but non-fatal foetal abnormality (64 per cent) or based on a woman’s socio-economic circumstances (72 per cent).

Mr O’Gorman said the poll demonstrated “yet again” that people favoured expanded access to abortion, adding it showed abortion was not the “divisive issue” many portrayed it.

“A substantial majority, 60 per cent, want women to have access to abortion on request which gives a clearer picture of the kind of legal and medical abortion framework the Irish public want. The poll also shows just how strongly the public support access to abortion in other circumstances such as when the woman’s physical or mental health is at risk.”

He said “some political and media commentators continue to paint abortion as a controversial or divisive” issue.

“It is not. They claim that people in Ireland would not support the recommendations put forward by the well-informed members of the Citizens’ Assembly who overwhelmingly voted for women to have abortion on request in early pregnancy and in specific circumstances thereafter.

“Public support varies on the precise gestational limits but it remains solidly behind women making their own decisions about their pregnancies.”