UFC champion Conor McGregor has apologised for using the word “faggot” in a recent clip that went viral. Video: RTÉ 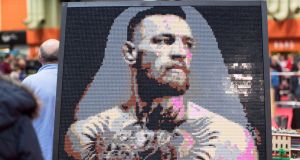 Conor McGregor made out of Lego in Birmingham, England. McGregor has apologised for using the word ‘faggot’ in a recent clip. Photograph: Aaron Chown/PA Wire

UFC champion Conor McGregor has apologised for using the word “faggot” in a recent clip that went viral.

In a pre-recorded interview set to be broadcast on RTÉ’s Late Late Show this Friday, McGregor apologised for using the slur.

In the interview, he said he was sorry for what he said and that he did not mean to disrespect the LGBT community by using the word.

McGregor has been at the centre of controversy since a clip emerged last week of him using the word three times in a conversation with fighter Artem Lobov after the latter’s defeat in a UFC bout.

“I was whispering in his ear and I was speaking on that and I said what I said. I meant no disrespect to nobody of the LGBT community. I didn’t mean no disrespect. You’d swear I was screaming at two people of the same sex kissing. I campaigned when we were trying to get same-sex marriage legalised, I was campaigning for that.

“It is another one where things just get blown out and they love to just . . . any chance they get they love to throw me under the bus. It is what it is. I’ll just say sorry for what I said and that’s it and try to move on from it,” he said.

“That’s the fighter I was going to watch and support. I witnessed him lose a fight, and a potential career-ending fight, in a manner where the opponent was stalling and running away and I was upset,” he said.

McGregor is in Dublin to promote the documentary Conor McGregor: Notorious, which will open in cinemas on Wendesday.