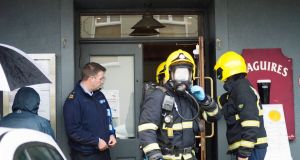 Gardaí and the Health and Safety Authority (HSA) are awaiting the results of a postmortem carried out on Tuesday on the body of a 64-year-old woman who was found dead in a hotel room in Co Galway.

The name of the woman, who is believed to be from Co Cork, has not been released. Her body was discovered at the Connemara Lake Hotel in Oughterard shortly before noon on Monday.

It is understood she was among a party of around 40 walkers who were staying in the town for a few days during the Halloween break.

Two other guests at the hotel were treated at University Hospital Galway later on Monday afternoon, having presented at the emergency department feeling unwell. They underwent tests and were released.

Guests at the hotel, which is located 25km west of Galway city, were evacuated.

Fire crews, wearing gas masks and using oxygen tanks, examined the building amid fears that carbon monoxide may have caused the woman’s death. A Garda forensic crew then carried out an extensive examination of the building once it had been declared safe.

The death of the woman at the only hotel in the tourist town has shocked the local community.

Minister of State Seán Kyne, who is from nearby Moycullen, said the death of the woman had caused widespread shock.

“The local community is saddened by the tragic death of a visitor to the area. I want to send my condolences to the family and friends of the deceased,” said Mr Kyne.

The hotel, which was busy during the mid-term break, was then closed and a statement from management expressed condolences to the deceased woman’s family.

The hotel and Maguire’s Bar have been operated for about the past three years by Ted and Annette O’Sullivan, who have been in the industry for several decades, having operated premises in Dublin.

The 16-bedroom property was extensively refurbished in 2005-6 and subsequently changed hands a number of times during the recession.

Inspector Tom Waters of Salthill Garda station said the results of the postmortem would determine the next course of action.