Call for demolition of 10,000 social housing flats in Dublin

Blocks in need of ‘significant regeneration’ should be knocked and replaced, says council 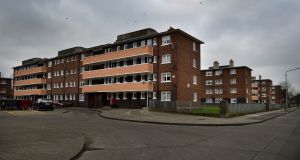 Archive image from 2013 of Dolphin House flat complex in Dolphin’s Barn, Dublin. While refurbishment is under way, other sites might benefit more from new builds. Photograph: David Sleator

Some 10,000 Dublin social housing flats, almost three-quarters of the city’s stock, are in need of “significant regeneration” and should be demolished, a new report from Dublin City Council says.

Many of the flat blocks, which include senior citizens’ complexes, are more than 50 years old and would take “many decades” to refurbish. This would involve a considerable cost but would not increase the stock of homes, the council’s head of housing Brendan Kenny said.

By “eliminating” these older blocks, the council could build taller, higher-density housing on the same land, potentially tripling the number of council flats to more than 30,000, he said.

Almost 20,000 families and individuals are currently on the council’s housing waiting list.

The dire condition of a number of council flat complexes was earlier this month the subject of a ruling from the European Committee of Social Rights. The Strasbourg-based committee found the human rights of local authority tenants in 20 estates in Dublin, Cork and Limerick had been breached because of a failure to provide them adequate housing.

In recent years, the council had moved away from a policy of levelling and rebuilding blocks to one of extensive refurbishment or “deep retrofit”, where flats would be stripped back and modernised. The policy followed the collapse of the public-private partnership (PPP) programme, when the council had detenanted and demolished several older blocks in anticipation of regeneration schemes that didn’t go ahead.

The council has also in recent years undertaken the redevelopment of several senior citizens’ complexes, by converting two bedsits into one-bedroom apartments throughout the blocks, to bring them up to standard.

Mr Kenny said refurbishment and retrofit programmes were not proving cost-effective, were likely to take “many decades to complete”, and would not necessarily represent the best use of council sites.

“The reality is that many of these complexes are over 50 years old, and are not up to standard. In some situations, it’s the issue of the stairways and lack of lifts, not necessarily the flats themselves, but many are affected by mould and condensation problems,” he said.

The conversion of the old-style bedsits was reducing the density of senior citizen complexes by 50 per cent, which was “not sustainable in light of the current housing shortage”.

Unlike previous demolition and rebuild programmes, the council would build first on land surrounding the existing blocks, move the tenants into the new apartments, and then demolish their old homes to build more apartments for those on the housing waiting list.

“We would build first, detenant, and then demolish, with a rolling programme over 10-15 years to eliminate all these complexes that, in effect, are not fit for purpose,” Mr Kenny said.

The strategy required more analysis and feasibility studies before final decisions could be made, Mr Kenny said. However he said it was “clear that the Government will prioritise funding towards the construction of new/additional homes rather than refurbishment over the coming years”.