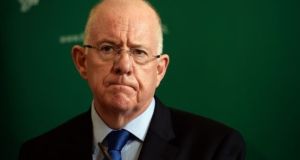 Minister for Justice Charlie Flanagan said the Government had agreed that the Magdalene Restorative Justice Scheme would now apply to the women who lived in adjoining institutions. Photograph: Eric Luke

Minister for Justice Charlie Flanagan has announced that the Magdalene redress scheme is to be widened to include women who worked in the laundries and were resident in 14 adjoining institutions.

Mr Flanagan said the Government had agreed that the Magdalene Restorative Justice Scheme would now apply to the women who lived in adjoining institutions, including all of those highlighted by the Ombudsman, Peter Tyndall, in a critical report published last November.

In the report, Mr Tyndall wrote that some women who worked in the Magdalene laundries had been wrongly refused access to the scheme and that they were treated in a “manifestly unfair” way by the Department of Justice under the terms of the scheme prepared by Mr Justice John Quirke in 2013.

Mr Flanagan announced on Saturday that a “general” payment would be made to women for the entire period of residency and a “work payment” for the time they spent working in a laundry. A central guidance will also be drawn up on the development and operation of any future redress schemes, he said.

The Minister said he was looking forward to meeting women who had spent time in the Magdalene laundries at an event at Dublin’s Mansion House on Tuesday, which he said would be “a celebration of true resilience”.

Some 692 women have been paid more than €26 million since the introduction of the Magdalene Restorative Justice Scheme in 2013. Some women have also received an enhanced HSE medical card and “top up” payments from the Department of Employment Affairs and Social Protection.

In his report last November, Mr Tyndall reported that younger women who were living in the same buildings or convent as older women registered as being in the laundries had been refused access to the scheme because they were registered with industrial schools or training centres.

Mr Flanagan said on Saturday that he was “committed to progressing action on the Ombudsman’s recommendations in consultation with his office” and that he would, as necessary, bring further updates and proposals to the Government.

He said that senior counsel Mary O’Toole, who was appointed in April, was continuing to independently review disputed cases and to advise applicants who may lack capacity to accept redress. The Minister also said on Saturday’s RTÉ news that he would re-advertise the scheme more widely.