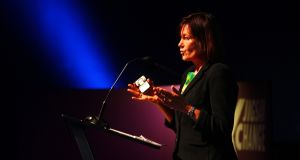 Women in crisis pregnancies may not be suffering from mental disorders, but access to abortion can nonetheless alleviate the “very distressing and serious state of mind” that an unwanted pregnancy can bring on, clinical psychologist Dr Lucy Johnstone has said.

Dr Johnstone was in Dublin on Thursday to present new research, published by the British Psychological Society, which advocates a less medicalised approach to treating mental health.

On the issue of women in crisis pregnancies and whether abortion can alleviate associated mental health issues, Dr Johnstone said that while an unwanted pregnancy may not result in a mental disorder, the trauma involved does affect mental health.

“These are not brain disorders but they are very, very distressing, and serious states of mind and states of body,” she said. “So, we have to take them seriously in a way that doesn’t necessarily involve calling them brain disorders, which they’re not.

“The trauma is very real. It’s a very real sense of distress that we need to take very seriously. Certainly [access to abortion can alleviate that].”

The issue is pertinent to the research, called the Power Threat Meaning Framework, which is co-authored by Dr Johnstone and Prof Mary Boyle, and was presented to 500 people at a talk hosted by Jigsaw, the national centre for youth mental health.

Speaking beforehand, Dr Johnstone said the thrust of the research, which was conducted in conjunction with service users, is “to put distress in its social context”, and argues that “distress doesn’t just happen at an individual level”.

It explores the links between wider social factors such as poverty, discrimination and inequality, along with traumas such as abuse and violence, and the resulting emotional distress or troubled behaviour.

This, said Dr Johnstone, as opposed to the diagnostic and drugs-based approach to treating mental health, “opens up new ways of supporting people” and allows them to take active steps to resolve issues.

“The question the framework tries to answer is whether there is an alternative way of understanding those experiences, which is not based on diagnosing them and telling people they have a medical illness,” she said.

“In essence, this is about helping people to come up with a personal narrative because there are almost invariably reasons, and those reasons lie in people’s life circumstances, their relationships, and life struggles they have.

“Once you put together a narrative, it suggests different ways [to tackle the issue] which may or may not be treatment as we currently understand it.”

Dr Johnstone said she was “not anti-drugs” but that anti-depressants are “too prominent” in dealing with mental health.

“They might be a way of supporting you to make life more bearable while you do some more difficult work around what needs to change in your life, and resolving things that may need resolving,” she said.

“The trouble is that if we have a diagnostic illness model, we tend to over-emphasise the use of drugs, and once that happens, we tend to be quite reluctant to look at their limitations, and of course they have limitations as well as advantages for some people.”

Dr Gillian O’Brien, director of clinical governance with Jigsaw, said the organisation “does not necessarily endorse all of the views put forward” at Jigsaw Exchange events.

However, the talks are aimed at “facilitating a forum for discussion so that we might challenge assumptions, present evidence, air the voices of young people, influence decisions and work collectively to advance our vision for Ireland’s young people”.