6,304 Indian nationals are registered as nurses in Ireland. This represents nearly 9 per cent of the total number of nurses on The Nursing and Midwifery Board and the majority of them come from the Kerala region of Southern India. 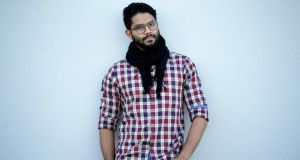 Vinu Narayanan, a nurse who has lived in Ireland for nearly a decade. Photograph: Nick Bradshaw

When Vinu Narayanan and Athila Kizhakkuveettil got married last year they immediately began planning their new life together in Ireland.

Narayanan, who has lived in Ireland since 2012 and works as a theatre nurse in Connolly Hospital in Blanchardstown, submitted a visa application in January 2018 for his wife to travel from India to join him.

He read it would take up to 12 weeks for the application to be processed and began making preparations for her arrival. The first thing he did was move from his shared house into a new home in Summerhill, Co Meath. However, 10 months later, the couple is still waiting for the visa.

“This has completely left me in limbo,” says Narayanan. “I can’t plan anything because I don’t know when she’s going to arrive. Renting your own house costs a lot; it’s taking a fortnight of my salary and I’m spending that for nothing.”

Narayanan has contacted the Irish embassy in India who confirmed the application had arrived. However, they were unable to say if and when the visa would be issued to his wife.

Like many of their peers, the couple met in India through an online marriage site and were married shortly after in September 2017. They spent just a few weeks together after the wedding in their home state of Kerala in southern India before Narayanan returned to his job in Ireland. They have not seen each other since. “I know we’re in a good relationship but I couldn’t say the intimacy between us is great. We’ve had issues because of the separation.”

Narayanan is one of the nearly 21,000 Indian-born nationals currently living in Ireland. Half speak Kerala’s principle language Malayalam as their native tongue, according to the 2016 Census.

Some 6,304 Indian nationals are registered as nurses, making up nearly 9 per cent of the total number of nurses on the Nursing and Midwifery Board register. While no formal data is available on where in India these nurses were born, it’s believed the vast majority come from Kerala.

India’s southern state has a long history of nurses migrating overseas seeking better pay and opportunities. Those who stay in Kerala will earn an average monthly wage of 20,000 rupees (€236) in government hospitals or between 8,000 and 12,000 rupees a month (€95-€143) in private hospitals. The starting salary for a graduate staff nurse in Ireland is €28,768 (€2,397 a month).

The number of Indian nurses working in Irish hospitals and care homes has steadily risen since 2000, when Ireland began actively recruiting nurses internationally. More recently, the number recruited from India has risen sharply, jumping from 79 successful visa applications in 2014 to 753 in 2017.

By October of this year, 577 Indian nurses had successfully applied for permission to work in Ireland. Like Narayanan, many of these will apply for a family member to join them.

Narayanan believes staffing issues in the embassy are delaying his wife’s papers but argues that efforts should still be made to process visas for skilled workers in a timely fashion.

“I work in the public sector and if I have a patient coming into my hospital I don’t tell them we don’t have enough staff. I organise myself and make the time. We had a strike yesterday regarding our pay because we are not satisfied – we are underpaid and we are understaffed. But we do not show that to the public, we service the public. I expect any other public sector to do the same for me.”

About 8,500km away, in the small city of Thrissur in Kerala, his wife is anxiously awaiting news of her visa. Believing the application would only take three months, she resigned from her job earlier this year. Also a nurse, she hopes to work in an Irish hospital once she arrives here. However, after more than a year of living with her husband’s family, she is losing hope.

“We were together for 20 days but since then we’ve been separated. This is a problem for our marital life. The first thing is I’m away from my husband, the second is the wait for the visa and the third is I’ve left my job. I’m feeling very depressed about it now. Vinu’s absence is a big void. And now they’re telling me it might take a year.”

Despite feeling increasingly disheartened by the long wait, Kizhakkuveettil is still excited about moving to Ireland. “Vinu wants his family to grow into the Irish culture. Initially I had dreams of bringing up my children in Kerala with our traditions and values but Vinu has brought me around to the Irish culture. There may be difficulties but for my husband’s sake I don’t mind adapting.”

One hour south of Thrissur, in the small village of Manjapra, Bindu Jojo lives with her mother Mary Poulouse and her three children, Joel (9), Emmanuel (3) and Christeena (seven months).

Jojo’s husband moved to Ireland two years ago, following in the footsteps of her brother and sister, who have both spent more than a decade working here. She applied for a family visa to join her husband three months ago but has received no response yet.

“It’s very difficult to bring up three children without their dad,” says Jojo. “It’s the hope that we can leave soon that keeps me going. My oldest son keeps asking what’s going on, when are we going to Ireland?”

Jojo’s mother is also anxiously awaiting news of the visa. Once her youngest daughter leaves she will be alone in Kerala. Poulouse’s husband died eight years ago and while her children visit India when they can, she often feels lonely. “They have to leave and look after their own lives,” she says, her voice faltering slightly as tears fill her eyes. “Thinking about my future, I’m feeling a bit scared. When I imagine myself being left alone here, that haunts me. I miss them but it’s their life.”

Back in Ireland, Narayanan says Ireland’s Malayalee association, which represents Keralans living here, provides important support and guidance for new arrivals. However, Narayanan himself is eager to integrate as much as possible into Irish society. After six years in the country he speaks English with a noticeable midlands lilt and has worked hard to build relationships with Irish people.

Before working in Blanchardstown, Narayanan spent more than five years working as a nurse in Mullingar, Co Westmeath. He strongly believes in promoting integration over multiculturalism, saying that encouraging the latter can lead to foreign nationals isolating themselves from Irish society.

“I’ve always been sceptical about multiculturalism. Integration is the solution. If you embrace multiculturalism you’re going to have pockets of different cultures who won’t integrate or interact and that affects your work and your self-satisfaction. If you find common ground and build memories (with Irish people) you can break that cultural barrier.”

Narayanan recently completed a diploma at the Royal College of Surgeons Ireland and is looking forward to progressing further as a nurse in the coming years. He says he is happy to be in Ireland and sees a future for himself here. However, the ongoing wait for his wife’s visa has forced him to consider taking his nursing skills elsewhere. “If they tell me it’s going to take another few months I’d rather plan to go somewhere else. It’s not a big deal for a nurse to find a job around the world.”