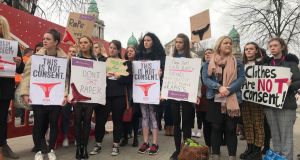 Women in Belfast protest after a barrister drew attention to a female complainant’s choice of underwear. Photograph: Pacemaker

The public backlash and “personal vilification” on social media of a barrister following the publication of her closing statements in a rape trial in Cork is causing concern in legal circles.

The barrister, Elizabeth O’Connell SC, drew attention to the underwear worn by a 17-year-old complainant on the night she alleged she was raped by a 27-year-old man in Co Cork. “Does the evidence out-rule the possibility that she was attracted to the defendant and was open to meeting someone and being with someone? You have to look at the way she was dressed. She was wearing a thong with a lace front,” she told the jury, which later acquitted the man.

The comments garnered global media interest, and led to an online backlash against the barrister, including the sharing of her photograph and other details on social media. Legal professionals were “shocked at the personal vilification of a professional doing her job,” one said last week.

However, few expected it to have a chilling effect on the manner in which barristers defend their clients. “Whatever about the issue receiving attention, the extent and the personal nature of the backlash was shocking, but we’re sufficiently robust to be able to deal with it,” one said.

Barrister Mary Rose Gearty SC said that although barristers are not public figures, they are aware of the “potential for publicity to attach itself to any comment that can be made, even in an adjournment application. In order to function professionally for the most part we must forget about that potential, and focus on the job at hand.”

Barrister Noel Whelan said that, while he had no doubt the journalist accurately reported what was said, without seeing the full context, “it is impossible for us to truly understand the approach being adopted by the defendant.”

His own experience has been that, “increasingly defence counsel have to be particularly careful not to criticise or gratuitously attack the complainant, because our juries are very discerning and any such approach is likely to be counter-productive.”

The Council of the Bar of Ireland said it does not comment on individual barristers or cases. “In respect of social media and the trial process, we await the guidelines from the Chief Justice and our members will work in accordance with the guidelines as set out.”

Chief Justice Frank Clarke announced last weekend that new rules seeking to ensure that only bona-fide journalists and lawyers may report or tweet from court cases will come into effect next Monday, November 26th.