‘There was still ample opportunity for us as a mother and daughter to come together, but the system certainly stopped that’ 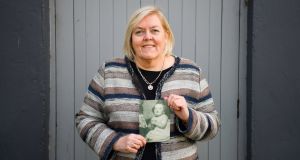 Teresa O’Sullivan (63) clutches a photograph of herself aged 18 months. It is one of her most treasured possessions.

The photograph was taken while she was in the Tuam mother-and-baby home in Co Galway where she stayed for almost the first two years of her life before being transferred to St Patrick’s orphanage in Cork.

“In the photograph I look healthy with a nice dress and slippers, but no one knows what’s going on behind the photograph,” says O’Sullivan. “I have ear trouble today, and at that time I had chronic abscesses in my ears.”

She hopes the report from Mother-and-Baby Homes Commission of Investigation – which has been delayed due to the Covid-19 pandemic – will provide “some insight” into the hearing difficulties from which she and other survivors suffer.

“I’ve met a good few survivors who have said that hearing difficulties seem to have been very prevalent. Some would have remembered being physically hit over the ears and on the head, so that certainly would have contributed to it. If you get a lot of people with the same thing, that’s saying a lot. We can’t all be wrong.”

Following the work of local historian Catherine Corless, the commission found in March 2017 that “significant” quantities of human remains had been found buried beneath the Tuam site. Corless gathered death certificates for 796 infants linked to the Tuam institution,

The commission, which has published a number of interim reports, was due to publish its final report this Friday.

The Department of Children and Youth Affairs said earlier this month that the final report was “very close to completion”, but “logistical difficulties” have arisen in keeping with current public health advice and directions due to Covid-19. The final report is now due to be published on October 20th.

“I am disappointed that it’s not coming out on June 26th,” says O’Sullivan. “I know we are in the midst of a lot of change with Covid and forming a government, I understand that, but I think everybody is waiting, and time is passing on and time is not on a lot of our sides. This is high priority.”

O’Sullivan was born in Co Galway in February 1957. Her mother, who became pregnant at 16, was admitted to the Tuam mother-and-baby home shortly before Teresa was born. She stayed in the home for a year before being discharged and left for England.

She says her mother, whom she wishes to remain anonymous, travelled back to the home a few months later to see was she still there to bring her back to London.

“When she came back one of the nuns said she had messed up her own life and that she wasn’t going to get an opportunity to mess up mine,” O’Sullivan says.

“They said I was on my way to America, which I wasn’t. Anyone that was earmarked for America had their photograph taken, so that’s why I have the photograph there, but I hadn’t gone anywhere. There was still ample opportunity for us as a mother and daughter to come together, but the system certainly stopped that.”

O’Sullivan was transferred from Tuam to St Patrick’s orphanage at the end of 1958. She was hospitalised for six weeks due to the abscesses in her ears, and later adopted by her parents Donal and Kathleen from west Cork. She worked as a nurse in Co Limerick until her retirement five years ago.

“I couldn’t speak highly enough of them, they were an absolutely wonderful family,” she says. “The only sad part of it was my adopted mum passed away when I was 12 , so it was just me and my Dad then from there on.”

It was only when O’Sullivan became pregnant with her first child, Cian, that she began looking for her biological mother. She went to St Anne’s adoption society in Cork, who were able to locate her mother, who was still living in London at the time.

They exchanged letters, and soon afterwards her mother travelled to Limerick where they were reunited.

“When I met her it took me a few minutes to see her because she gave me such a big hug, I didn’t see the woman for a few minutes,” says O’Sullivan. “She was a beautiful woman, a very gentle woman…it was a lovely meeting.”

Her mother had also brought with her the same photograph of her as a baby in Tuam.

“She just put it up on the table. The photographs were identical. That’s when I knew I had found her, I had really found her.”

Her mother passed away in 2006, and despite attempts to look for her biological father, she discovered he had died in 2008.

“I never really got to know much about Tuam at all in the time that I spoke with her,” O’Sullivan says. “I could see the faraway look in her eyes whenever it would come up, and I never pursued it at all because I didn’t want to hurt her. I just knew there was a lot more.”

While O’Sullivan does not remember anything from her time in Tuam, she says “my body remembers”.

“When I’m making decisions about anything in my life now, abandonment, rejection is very, very strong. Sometimes I might feel I’m not as good as everybody else or kind of a second-class citizen because that’s the way we were treated. That’s why I think it’s so important now that everything is put out there.”