Immigrants have to pay sites to secure visa appointments 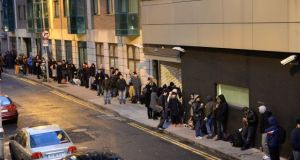 The online renewal visa system was introduced in September 2016 to end the long overnight queues which had become a fixture outside the INIS office on Burgh Quay in Dublin. File photograph: Cyril Byrne

Immigrants are having to pay fees to visa sites in order to secure appointments to renew their visas with the Irish Naturalisation and Immigration Service (INIS) despite Government attempts to reinforce the online booking system.

The Department of Justice responded to reports last month that internet “bot” programmes were block-booking appointments with the INIS by introducing software changes and working with IT experts “to prevent bots from harvesting appointments from the online appointment system”. However, one month on, hundreds of foreign nationals remain unable to secure appointments and are turning to sites offering access to slots for €20-€30.

Lauren Olmeda has been unable to secure an online appointment since moving from Canada to Ireland with her Irish husband earlier this month.

“I went on Facebook out of frustration to see if people were talking about this and I found a page selling appointment slots,” said Ms Olmeda.

She contacted the administrator of the page and was told she needed to transfer €30 as well as passport and personal details to secure the slot. When she accused the operator of financially exploiting immigrants, she was told the official system was too complicated to navigate for most new arrivals.

“I’m lucky that I’m not here on my own but it worries me,” she says. “It’s students from other countries who don’t have any money who will end up giving a stranger their money and personal details.”

The online renewal visa system was introduced in September 2016 to end the long overnight queues which had become a fixture outside the INIS office on Burgh Quay in Dublin. The new system allowed applicants to sign up, free of charge, six weeks in advance of the appointment. However, in recent months it has become nearly impossible for foreign nationals to secure an appointment.

In September, the Department of Justice introduced a new postal system for re-entry visas to “improve efficiency”. Customers with urgent travel needs were told they could make an emergency online appointment for a re-entry visa and their application would be dealt with within 24 hours. The online system also remains in place for people renewing their permission to stay in Ireland.

Harshvardhan Pandit, a PhD researcher in data protection at Trinity College Dublin who has investigated the current INIS booking system, said the security measures protecting the site were far too simple and could be easily infiltrated using simple coding. Despite slight changes in the INIS coding system since September, he said most of the security flaws remained in place.

“Early on the site was like an open door system with no lock on it. There was no authentication mechanism and no checking if it was a human sending the info. Any security measures that have been implemented are superficial.

“Changing it is really quite simple. This is not a unique system; online visa application sites are used around the world. I wish the Department of Justice would officially apologise for the problem and then invite some technologically knowledgeable people in to improve it. There is a lot of fear in the people being exploited and charged for their appointments. People are panicking.”

Speaking anonymously to The Irish Times, an operator of one of the Facebook pages selling the slots, claimed they set up the block-booking system to assist foreign nationals seeking appointments.

“INIS system shows you an available slot but you have to be very fast if you want to get that,” the operator explained over Facebook chat. “Many people try to get the same slot at the same time. We thought if we try to get an appointment with a crowded team, we can supply someone in need.” Asked to comment on the decision to charge up to €30 to secure an online visa appointment, the operator said it was “a new job idea for us”.

A spokesman from the Department of Justice said software changes introduced on September 10th had been “successful to date in preventing further abuses” and the system was under “constant review”. He added that an increased number of appointments had been made available and the office was now opening on Saturdays to meet the increased demand.