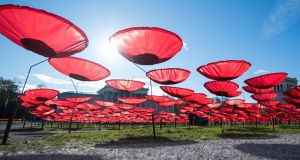 An art installation of 3,200 giant poppies made of artificial silk to remember the end of the first World War I at Koenigsplatz square in Munich, Germany. Photograph: Lennart Preiss/EPA

Dublin Quakers are inviting members of the public to join them in making white poppies to form an art installation in Merrion Square on Armistice Day nest Sunday.

Members of the Religious Society of Friends (Quakers) will be making white poppies from 10am to 3pm to commemorate the 9.7 million soldiers and 10 million civilians who died during the first World War.

“We will be making white poppies to commemorate not the generals and politicians, but the ordinary decent people who suffered,” said Séan McCrum, Convenor of the Dublin Quaker Peace Committee.

“This event is to remember everyone, including the many from Ireland North and South, who was killed or wounded or terrified by military violence during World War One,” he said.

A marquee will be set up in Merrion Square and passers-by will be invited to make a white poppy and add it to an art installation in the grass.

A short period of silent commemoration will be held at 11am - the 11th hour of the 11th day of the 11th month when armistice was declared in 1918. This will be followed by readings of poetry and prose written by people who were involved in combat during the first World War as well as by civilians. Included will be writings from women.

A similar event, organised by the Dublin Quaker Peace Committee, took place at Merrion Square two years ago to mark the end of the Battle of the Somme.

“Members of the public are central to this,” said Mr McCrum. “When we commemorated the final day of the Battle of the Somme, many people were emotionally very involved by making a white poppy and planting it because members of their families had suffered in combat.

“Quakers do not have a creed but we do have testimonies that are central to our thinking - testimonies of peace, simplicity, equality, integrity and community. The following statement was made in 1661 by early Quakers and we believe it is a valid now as it was then: ‘We utterly deny all outward wars and strife and fighting with outward weapons, for any end or any pretence whatsoever’.”