Homeless should be allowed stay in Apollo House, says Zappone

A group of housing campaigners called, ‘Home Sweet Home,’ took control of an empty office block on Poolbeg Street in Dublin last week. In response to the homelessness crisis they have moved a number of people into makeshift bedrooms in the building. 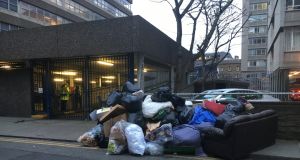 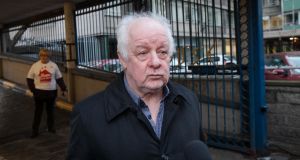 Minister for Children Katherine Zappone has said she believes homeless families should be allowed to stay in Apollo House over Christmas.

The building has been occupied by a group called Home Sweet Home which is allowing homeless men and women reside there.

Ms Zappone said she supported comments made by Fr Peter McVerry, who said the occupation was not the solution to the homeless crisis.

However the Minister said she believed those residing there should be allowed to remain if no alternative accommodation can be found.

Ms Zappone said: “If that’s what provides the appropriate shelter for those people during Christmas, why not.

“It is very complicated, there are lots of things that need to change.

“There is a lot of administrative bureaucracy, we need to cut through that tape in terms of supply, and I’m very glad we’re at the point that there’s some form of rent freeze over the coming years.

“But it isn’t moving fast enough so I think it is really important and I welcome engaged citizens to call for more.”

In contrast, Minister for Housing Simon Coveney said on Friday that while he understood people’s frustration, the occupation of the building was not the right way to resolve the difficulties facing homeless people.

Meanwhile, showers and kitchen equipment will be installed in Apollo House on Monday afternoon.

Quentin Sheridan, founder of Home Sweet Home – the coalition of trade-unionists, housing activists and artists that took control of the Tara Street building on Thursday – said they had been “overwhelmed” by the positive response from the public and business community.

“We have had to stop taking perishable food and to donate it to soup runs. And we are inundated with duvets and blankets. The things we really need now are pillows, duvet covers, more mattresses and we urgently need freezers,” said Mr Sheridan.

Catering equipment company Caterex was on-site on Monday morning, measuring up for the installation of cookers, vegetable racks, bain-maries as well as fridges and freezers.

Caterex director, Michael Gowran, said he heard about the purpose of the occupation on Friday and was happy to help. He said any equipment he installed would be easily transported to a new facility.

Brendan Ogle, group co-founder and a Unite trade union official, said the number of people staying there had increased dramatically since Thursday night. The current capacity of about 30 could increase to 60 once things were “up to scratch”.

“Upstairs things are settling down. It rose up very, very quickly in terms of the intake. We went from five, to 12, to 21. There were 35 there last night. We need to get the facilities up. There are kitchens and showers going in today now. Once that happens we think we are able to cope with 30 people a night. We need quite a bit more work to get above that.”

The group’s solicitor, Gary Daly, had written to A&L Goodbody representing receivers for the building, Mazaars, on Monday morning.

“The receivers are looking to know who the co-founders are. Everyone wants to co-operate and that list is being put together. Our solicitor wrote to the receivers this morning at 10am and said that they would be providing the list.

“As far as we’re concerned we are absolutely entitled to do this. Not only entitled but morally obliged as citizens of Ireland. The Government weren’t doing anything [to shelter homeless people in empty buildings]. The citizens of Ireland were morally obliged to and they’ve done it. The judge may disagree but we’ll be making very strong arguments when it gets to that stage.”

He said the group would be “happy” to meet the receivers later in the week.

A&L Goodbody solicitors said in a letter on Friday that the demonstrators were trespassing and sought a meeting “with a view to agreeing an immediate and orderly vacation of the property in the interests of the health and safety of those who are unlawfully trespassing” there.

However, Mr Ogle said the building has been made safe with the help of skilled craftspeople from the trade union movement.

Since it was occupied on Thursday, light and heating has been restored, the water supply re-opened and fire alarms installed.

The centre is a “dry” facility, and those entering are liable to be searched for drink or drugs. Security operates on the doors, and residents are asked to observe silence between midnight and 7am.

Men account for about three-quarters of residents but couples have also been accommodated. The facility is not open to children for child protection reasons.

People have had to be turned away and a waiting list is in place, he says.

The most recent rough sleeper count, in November, found 142 people sleeping rough in Dublin and 77 people sleeping on rollout mats in the Merchants’ Quay night cafe, bringing the total number of adults unable to access an emergency bed to 219.