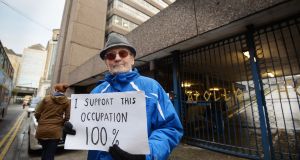 Solicitors for the receivers to Apollo House wrote to the protestors, saying that while they “sympathetic to the plight of those that are homeless” they “cannot allow the property to unlawfully occupied by trespassers”. Photograph: Alan Betson

Housing activists who took over an empty office block in Dublin to accommodate the homeless have been served with legal notice to “vacate” the building or face court action.

The protestors, including a number of high profile artists and musicians and calling themselves Home Sweet Home, gained entry to the vacant office building, Apollo House, on Thursday night.

A number of rough sleepers slept there on Thursday and Friday nights.

Solicitors for the building’s receivers wrote to the protestors on Friday evening, saying that while they “sympathetic to the plight of those that are homeless” they “cannot allow the property to unlawfully occupied by trespassers”.

This was “particularly in light of the condition of the property and the obvious health and safety concerns”.

A&L Goodbody solicitors, acting for the receivers, Tom O’Brien and Simon Coyle of Mazars, say Home Sweet Home are “trespassing” and they want to meet them “as soon as possible with a view to agreeing an immediate and orderly vacation of the property in the interests of the health a safety of those who are unlawfully trespassing on the property.

Brendan Ogle, co-founder of Home Sweet Home, said the coalition would be happy to meet Mr O’Brien and Mr Coyle to discuss the best use of the building.

He said the building was “safe” for people to sleep in.

“We have had Dublin Fire Brigade in to inspect the premises and they are very happy with the rules and systems we have in place here. So that is great. We also have a team of maintenance workers, plumber, joiners, that sort of thing. So we are very happy everything is being done correctly and to the highest standards. And yes we’ll meet them [THE RECEIVERS]. Why not?”

Spokeswoman Rosie Leonard said there were “five homeless families” in the building on Friday evening, and this number would increase as “maintenance issues were resolved” and office space made suitable for bedrooms.

Electricity and water had been connected and turned on. She said she expected up to 30 people could be accommodated on “a few floors” in the 10-storey building.

The property was part of a portfolio of loans relating to Shelbourne Developments, a company controlled by Garrett Kelleher, which were taken over by Nama. In April 2014, Nama appointed Mazars as a receiver to the properties.

The most recent rough sleeper count, in November, found 142 people sleeping rough in Dublin and 77 people sleeping on roll-out mats in the Merchants Quay night cafe, bringing the total number of adults unable to access an emergency bed to 219.