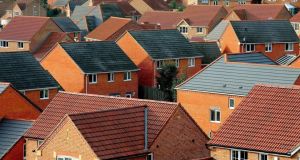 Between the canals in Dublin, 8,857 apartments and houses were deemed vacant by this year’s census enumerators. Photograph: Rui Vieira/PA Wire

More than 20,000 apartments and houses, excluding holiday homes, are vacant in Dublin city and suburbs, with nearly 9,000 of those in the city centre, according to this year’s census.

In addition, just in excess of 2,000 commercial properties are vacant, according to Dublin City Council, which gives a discount on rates on empty buildings.

Both these figures might seem unacceptably high, given the acute need for housing in the city.

However, the building selected by the homeless campaigners to illustrate the scandal of empty properties, is curiously, not one that has been left to moulder.

Apollo House on Tara Street had until last year been leased by the Department of Social Protection.

The 1969 building is currently vacant because, along with its neighbour Hawkins House it is the subject of a planning application to the city council for its demolition and redevelopment.

The €50 million scheme involves the demolition of all buildings on site and their replacement with a new office and retail complex.

The number of empty commercial buildings in the city has fallen significantly and is about half what it was in 2009 and 2010, and vacancy rates in the city centre are significantly lower than those in the suburbs, less than 4 per cent as opposed to just over 10 per cent in suburban Dublin.

Commercial buildings are unlikely to provide a solution to homelessness and housing shortages, but there is potential in returning vacant houses to use.

The census showed a residential vacancy rate for Dublin city of 9 per cent, which is lower than the national rate of 13 per cent, but the number of vacant homes is still substantial particularly in some parts of the city centre.

Between the canals 8,857 apartments and houses were deemed vacant by enumerators, who called several times to each property in an attempt to establish if they were in use.

In the inner city, residential vacancy rates were particularly high, with districts immediately north and south of the river showing vacancy rates above 20 per cent and in almost all parts of the city centre more than 10 per cent of homes were empty.

Although mostly these homes were apartments and flats which present difficulties for enumerators in establishing occupancy.