Apollo House occupation ‘not the solution’ to homelessness crisis 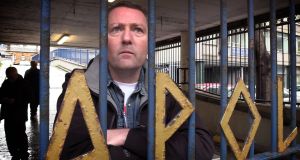 Dean Scurry from the group ‘Home Sweet Home’ who has stayed overnight in Apollo House helping the homeless people who have moved into the Dublin city centre property. Photograph: Bryan O’Brien/The Irish Times 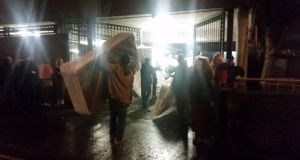 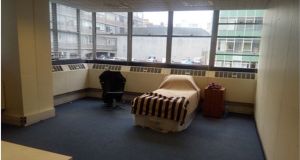 A spokeswoman for ‘Home Sweet Home’ said she expected up to 30 people could be accommodated on “a few floors” in makeshift bedrooms in the 10-storey building. Photograph: Irish Housing Network

The occupation of an empty office block in Dublin by a group of housing campaigners would highlight the plight of those on the streets but was “not the solution”, campaigner Fr Peter McVerry has said.

He told The Irish Times he would not be lending his support to the occupation of Apollo House because he preferred to channel his energies into finding long-term solutions.

He doubted whether many rough sleepers would want to stay in the building, which is being redeveloped after loans relating to the property were taken over by Nama.

“I applaud them in highlighting the issue,” said Fr McVerry, who has been working with the homeless and other vulnerable people in Dublin for more than 40 years.

“Here we have a state-controlled building lying empty while people are sleeping on the streets; it’s a scandal and they are highlighting it.

“I have no problem with them taking over the building. However, it’s not the solution to the homeless crisis; that’s my difficulty and that’s what I won’t join them. I want to focus my energies on campaigning to get a solution.”

Fr McVerry added the takeover could be interpreted as a sign that any form of accommodation was adequate for one section of society.

He also believed it would have minimal real impact as a significant number of those currently sleeping rough were on the streets because they preferred not to stay in dormitory accommodation.

“This project is one big dormitory,” he said.

The occupation, which began on Thursday night, is being carried out by a group called Home Sweet Home. It is being supported by a number of celebrities including director Jim Sheridan, actor John Connors, and singers Hozier, Liam O Maonlaí, Glen Hansard and Damien Dempsey.

The 10-storey building was being accessed by protesters via a vehicle and pedestrian ramp from Poolbeg Street normally used by those using a private car park beside Apollo House.

The Irish Times was refused entry by protesters equipped with walkie talkies who identified themselves as “security guards”.They said the media was not being allowed into the building to protect the privacy of those inside.

Spokeswoman Rosie Leonard said there were “five homeless families” in the building on Friday evening, and this number would increase as “maintenance issues were resolved” and office space made suitable for bedrooms. Electricity and water had been connected and turned on. She said she expected up to 30 people could be accommodated on “a few floors” in the 10-storey building.

Garda sources suggested the occupying of the building was a civil matter and while the situation would be monitored and gardaí would visit the building, there were no plans to forcibly remove those inside.

Nama has stressed that it does not own Apollo House, and “any issues arising are for the receiver of the building, not Nama”.

The property was part of a portfolio of loans relating to Shelbourne Developments, a company controlled by Garrett Kelleher, which were taken over by Nama. In April 2014, Nama appointed Mazars as a receiver to the properties.

A spokeswoman for Mazars said: “The current occupiers are trespassing on private property and we are asking them to leave with immediate effect. In the circumstances we have no option but to refer the matter to our legal advisers to pursue the appropriate course of action.”