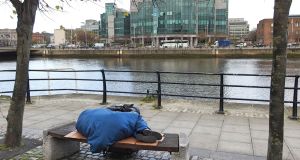 Focus Ireland said its services are ‘deeply aware of a disturbing number of cases of suicide among homeless people’ since the Covid crisis. File photograph: Getty

Frontline staff in homeless hostels have received extra training in response to a “significant increase” in suicide attempts, an Oireachtas committee heard on Friday.

Una Burns, policy officer with the Novas housing charity, said the training had been provided to staff in its Dublin, Limerick, Kerry and Tipperary hostels last year due to a “spike” in self-harm and suicide attempts among residents.

“From the middle of last year we saw a significant increase in our services of people that were self-harming, having suicidal ideation and were attempting suicide,” she said.

Dr Burns was addressing the Oireachtas committee on housing which heard a record 79 people known to homeless services or sleeping rough died in Dublin last year. Of these 44 had been in emergency accommodation, 27 had been in long-term supported tenancies and eight died while sleeping rough – five of whom were not known to services.

Assistant chief executive of Dublin City Council Brendan Kenny said the authority is “obviously very concerned at the deaths” which are “coming in from” hostels in the private and NGO sector. There had been a “surge” in deaths since July.

“We have a very intensive review being carried out at the moment and we will be publishing that. It’s difficult to know how to try and reduce that figure. I am not sure whether anxiety and issues around Covid has made a difference. There have been a number of suicides and certainly mental health and addiction are the key issues as far as we are concerned.”

Sinn Féin TD Eoin Ó Broin said it may be time for the adoption of “a practice in the UK of adult safe-guarding reviews”. These would be statutory investigations in the circumstances leading up to and around the death of an adult engaging with homeless services. Such reviews would enable us to “see how the care can be improved in the future for other users”.

In a submission Focus Ireland said its services are “deeply aware of a disturbing number of cases of suicide among homeless people” since the Covid crisis.

It called for consistency in how such deaths are reported and how homeless is defined. It noted that people dying in hospital or in long-term accommodation may be described as “homeless” when they would not otherwise be.

“Focus Ireland would welcome a sector-wide policy and formal reporting process and a considered recommendation from the committee to [local authorities] would be a constructive step,” it said.

“The people we meet have a myriad of social problems,” she said, including intergenerational poverty, absence of opportunities to work or have a stake in society and childhood trauma – often manifesting in serious alcohol and drugs problems.

The latest data from the Department of Housing shows the number of homeless families fell from 1,034 with 2,452 children in November, to 970 with 2,327 children last month.

The number of homeless single adults without children however remains stubbornly high, at 4,447. Though this is slightly down on the 4,536 in November it remains eight per cent higher than the 4,094 recorded 12 months previously.