Government to review policy on no driving licence for asylum seekers 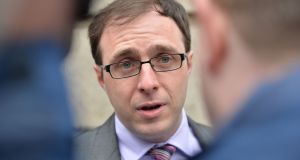 Fianna Fail transport spokesman Robert Troy said many asylum seekers who now wish to take up work would need to be able to drive to do so. File photograph: Alan Betson

A review is underway as to whether asylum seekers should be allowed to apply for driving licences.

It follows a Supreme Court ruling earlier this year that opened up the right to work for those awaiting the outcome of asylum applications.

Responding to a question on the issue on Wednesday, Minister for Transport Shane Ross said while that court ruling had no bearing on the issue of driving licences - which have historically not been issued to asylum seekers – he has nevertheless asked officials in his department to re-examine the matter.

Mr Ross said he would be happy to consider the granting of licences once a number of other issues had been resolved, relating to the “integrity” of the system.

“[Licences] are also widely used as proof of identity,” he said. “It is a core component of the driver licensing system that the identity of applicants has to be verified.”

He said it would not be appropriate to give licences to some people who could not verify their identity to the same standards as others.

“I appreciate that some asylum seekers will not be able to verify their ID to this level,” he said.

A system would also be required, Mr Ross continued, to allow for the cancellation of a licence in cases where asylum applications are turned down.

He was responding to a question from Fianna Fail transport spokesman Robert Troy who said many asylum seekers who now wish to take up work would need to be able to drive to do so.

“Some asylum seekers live in areas without readily accesses to public transport and if we are serious about helping them into the workforce then one essential requirement is that they be able to obtain a driving licence, buy a car and travel to work,” he said.

Mr Troy pointed out that the issues raised by the Minister were not insurmountable as other EU countries had systems in place.

However, Mr Ross declined to commit to any timeframe for his Department’s review, particularly given the issue of reliable identification.

“Asylum seekers come to the jurisdiction with a variety of documentation or, potentially, in some cases with no documentation at all,” he said.