No Irish deaths reported on Wednesday, which was ‘European day without a road death’ 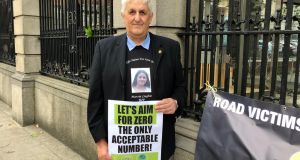 Leo Lieghio, whose 16-year-old daughter Marsia was killed in a hit-and-run incident in 2005

Families of those killed and seriously injured on roads have called for motorists to be extra vigilant in an attempt to ensure no lives are lost during “European day without a road death”.

September 19th has been designated across the EU as a day to stop road deaths in a campaign also known as Project Edward. The Garda reported no fatalities on Irish roads over the course of the day.

An average of 70 people die each day on Europe’s roads. For the past two years on this day the number of fatalities has reduced to 43. Last year there were no deaths on Irish roads on the day.

Speaking at a vigil outside the Dáil on Wednesday morning, Donna Price – founder and chairwoman of the Irish Road Victims’ Association – said although the number of deaths on Irish roads had halved in the past 12 years, motorists must not become complacent.

“We want to focus people’s minds today on the devastation that is caused to families, the lives that are destroyed, as a result of road traffic collisions.”

Ms Price’s son Darren was killed in 2006 when his car was hit by a HGV when he was on his way to college. “We don’t want anyone else to [get] that awful knock on the door, or to be the cause of the knock on the door.”

Leo Lieghio, whose 16-year-old daughter Marsia was killed in a hit-and-run incident in 2005, said Project Edward helps keep the memory of those who have died alive.

“By speaking about our loved ones we hope to focus minds today so that motorists remain vigilant on the roads and prevent further deaths,” he said.

“These deaths are preventable, and while the numbers have reduced it is not acceptable that collisions caused by drink, speeding, and the use of mobile phones continue.”