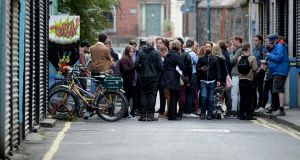 People gather in Dublin 1 for a session on dealing with evictions, hosted by the Take Back the City group. Photograph: Cyril Byrne

The group of housing activists occupying vacant properties in Dublin city centre ran an open training workshop to teach tenants how to resist an attempted eviction on Tuesday.

The campaign group, Take Back the City, is currently occupying 41 Belvedere Place in Dublin 1 in defiance of a High Court order to vacate the property.

The building is the third vacant property the activists have occupied since early August as part of a protest over the amount of vacant housing in Dublin.

The group ran a public training workshop on Tuesday on how to resist an attempted eviction, which was attended by about 50 people. The training took place at Jigsaw community centre on Belvedere Court near Mountjoy Square.

Media were not permitted to observe the training, but loud shouting could be heard from mock drills being run inside.

Around ~50 people outside Jigsaw office where Take Back the City activists are running a workshop on how to occupy buildings and to resist an eviction #TakeBackTheCity pic.twitter.com/7cW6wBBP3U

Oisín Vince Coulter (24), one of the senior activists in the group, and president of Trinity College Dublin graduate students’ union, said the training was a “step-by-step guide to what you should do in case your landlord decides they are going to throw you out on the street illegally, which happens very regularly”.

The training session was not about recruiting new members to help resist a potential repossession attempt of 41 Belvedere Place by the owner, he said.

“We do already have resources in place in order to handle a situation where there would be an eviction of Belvedere Place – we don’t foresee that this is going to lead directly into that. We have people that have been involved for a long time and know exactly what they’ve got themselves in for,” he said.

The group said they would not be detailing the exact steps or training they were providing to people.

The training was aimed at giving tenants information as to how they might prevent themselves being evicted from their accommodation, Mr Vince Coulter said.

“The very practical steps as to who you should call first, what you should do if they have brought ‘heavies’, what are your legal recourse in terms of the Residential Tenancies Board or the legal system, how the guards treat these situations,” he said.

The training would also include tips on what to do if “they are breaking down the door”, he added.