Life in a closed convent: ‘There is a sense of peace’ 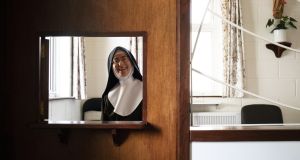 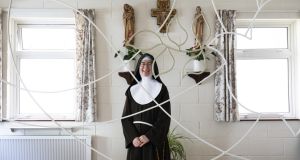 Sr Colette Marie says the nuns were “heartbroken” by the outcome of the abortion referendum, but says they will continue to pray for the spiritual welfare of Ireland. Photograph: Clare Keogh/The Irish Times

At 5.30am every day, Sr Colette Marie, who is a nun in the Poor Clare, an enclosed order in Cork, gets a knock on her door telling her and the other sisters it is time to get up.

Behind the grille at the convent she laughs as she says some mornings the knock is easier to deal with than others. However, she and her fellow sisters always reply with the words “God reward you” or “Thank you”.

“You might not feel like saying thank you. Half five is our ideal rising time. If half the community have colds or flu we get up at six. It is a bit penitential.”

The 50-year-old law graduate, who entered the convent in 1989, says the day starts peacefully with a quick cup of tea and prayers. The sisters pray together first and then they have personal prayer time followed by Mass.

“It is quiet. The lights are on in the tabernacle. I am not too sharp at that hour of the morning. But it is lovely to be sitting there in the dark.”

When Sr Colette Marie, who is a native of Templemore, entered the convent in 1989 at the age of 21 she felt at home. The Statue of Our Lady onsite reminded her of her days with the Legion of Mary and her sense of ease was immediate.

That said, in the months after entering, she admits she had a tremendous sense of curiosity about what was happening outside the building in bustling College Road, which is home to a hospital and a university.

“Initially, being enclosed is the most obvious part of joining up. I entered in October heading towards the winter and I used to go in to the garden and think ‘What is happening over the wall?’ That was normal I guess.”

Making the decision to join the enclosed order was not without its difficulties.

“Going back to the beginning when I decided to come it was not so much that I wanted to come but I felt God wanted it. So it was really about doing what he wanted.”

Hailing from a close-knit family of eight, she said her loved ones feared losing contact with her. “I remember when I actually entered there was huge trauma about entering. There is no getting away from it. I had made the decision but my family hadn’t made the decision. They were respecting my decision. People said ‘couldn’t you have picked a different order? An easier order? Rather than enclosed?’”

Sr Colette first became aware of the convent in 1985 when she went to University College Cork to pursue her law degree, having had an interest in human rights. “I would cycle past. It was in the back of my mind. It was always there.”

Leaving friends behind was a wrench. At that stage there was no means in place to see them. She did see family but with friends she could only maintain a postal correspondence. Missing family occasions was also tough but Sr Colette says she has gained far more from her way of life than she lost.

“Peace is part of the gain. There is a sense of peace. A sense of doing what God wants.”

One of the most enriching aspects of her life is the prayers she offers on behalf of the people she meets at the grille in the convent every day. The nuns are available to the public three hours a day most of the year and they also respond to numerous letters.

“What is lovely about our way of life is that people come in to us asking for prayers. They ring the doorbell and there is a grille. We open our shutters and we talk.

“We do hear very sad stories. People come if they are after getting bad news. Young people often come. A girl called the other day going for a job interview. And she called back to say she got it.”

Sr Colette Marie has heard every shade of human pain from marital breakups to financial and health worries. She says that at times she is taken aback by the depth of suffering that people experience in life. “ It could be a case of three people in a family having cancer.”

Life is busy for the sisters as they do all the cleaning and gardening themselves and share kitchen and altar duties. Sr Colette Marie says that when she leaves the convent for religious meetings she has a strong appreciation for the visual riches of the countryside.

“What strikes me, and having not been out for the first seven years, was nature. We have a lovely garden and every day is different but to go out and drive. The motorways are nice but I love country roads. Even country towns. Our country is stunning. I love the sea. I think it would have been 10 years before I saw the sea after I entered. And it was awesome to see it. It was almost worth not seeing it in 10 years.”

The nuns keep in touch with current affairs via daily RTÉ radio, the Catholic newspapers and The Irish Times, which they get once a week. They watch television on special occasions such as the visit of Pope Francis, or when Queen Elizabeth came to Cork and the “plane flew over the convent”.

Sr Colette Marie says the nuns were “heartbroken” by the outcome of the abortion referendum, but says they will continue to pray for the spiritual welfare of Ireland.

Rising levels of homelessness also upset her and the other sisters. “Everybody should have a roof over their heads. We are not meant to be sleeping out in Ireland. I don’t think God wants anybody sleeping out.”

She says what she has noticed is that is a growing need for silence and quietness in this frenetic world. “Definitely nowadays it’s harder. When I was growing up I walked to school and I could be looking at the trees and talking to whoever I might meet as I went along.”

Sr Colette Marie urges women to consider a vocation to the convent, saying that she has had an enormously enriching life.

“A few weeks before I entered the convent my dad and I visited a man who had a lovely shrine to Our Lady in his garden. On the way out he took a rose in his garden and gave it to me. I knew I was going to enter anyway but this was a sign. There is great peace here. I would recommend this way of life.”

Letters can be sent to the sisters at the convent in College Road, Cork. They are having a Vocations afternoon on October 13th from 2pm to 4.30pm.