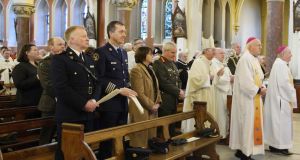 Archbishop of Dublin Diarmuid Martin was the principal celebrant at Mass for World Day of Peace in the Church of the Sacred Heart in Donnybrook Dublin on Monday. Photograph: John McElroy

President Michael D Higgins was praised as “our best diplomat” and for “the extraordinary work he does,” at the World Day of Peace Mass in Dublin on Monday morning.

Catholic Archbishop of Dublin Diarmuid Martin made the comments at the end of the annual Mass to mark New Year’s Day. A presidential election is scheduled to take place next November and Mr Higgins has yet to declare whether he intends running for a second term.

In remarks at the end of the Mass, which took place in Donnybrook’s Church of the Sacred Heart, Archbishop Martin also praised the work of the Defence Forces, who were “renowned for their work for peace”, he said, and the Naval Service “for the extraordinary way they carry out their duties”.

Many people forgot that the “síochána” element in the title An Garda Síochána “means peace”, he said. He reminded people of “the particular way young gardaí face very difficult and emotional situations”. They were owed “a great debt”.

He praised “the work of our diplomats abroad”. Having worked as a diplomat himself for many years, he recognised “the prestige enjoyed” by Ireland’s diplomatic community “including our best diplomat, the President, and the extraordinary work he does”.

Referring to a likely papal visit to Ireland next August, the archbishop hoped Pope Francis would “lead us in a reflection on our role as a country”.

Archbishop Martin was chief celebrant at the Mass, which was concelebrated with Dublin’s two auxiliary bishops, Eamonn Walsh and Ray Field.

In the homily, Donnybrook parish priest Msgr Lorcan O’Brien expressed frustration at how illegal immigrants are treated in Ireland.

He recalled how “in his message for this day, Pope Francis, asks government leaders to protect, welcome, promote and integrate migrants and refugees”. In Ireland “we could add the homeless”, Msgr O’Brien said. “Their plight touches us” and “not just because of our own history” but because they alert us to “the desire for a life, for a better life”.