Formerly a sergeant in the Aran Islands, Ó Cualáin rose through the ranks 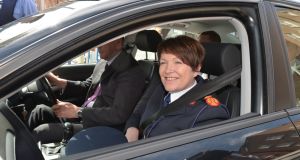 Dónall Ó Cualáin filled the role of acting commissioner this summer when Nóirín O’Sullivan was on a six-week holiday. Photograph: Alan Betson / The Irish Times

From Carna, he speaks fluent Irish and has served as sergeant in the Aran Islands before rising through the ranks as inspector, superintendant and chief superintendent over the Galway division. He was central to a crackdown on drugs in Galway city.

In July 2012 he was appointed to the post of assistant commissioner in charge of the western region.

In November 2013 he criticised cuts to the Garda budget, raising the prospect that private security firms could be tasked with serving summons or issuing firearms licences if there were further cuts.

In July 2014 then Garda Commissioner Nóirín O’Sullivan appointed him to take on responsibilities of deputy commissioner focusing on strategy.

In September 2015, he was appointed by Ms O’Sullivan to examine the findings of the interim report from the Fennelly Commission – which was examining the recording of non-999 calls to Garda stations – and to identify any action necessary in the force.

In October 2015 he was transferred back to the western region, as deputy commissioner.

He filled the role of acting commissioner this summer when Ms O’Sullivan was on a six-week holiday.