Anger over Government housing policy at vigil for Jack Watson

Plea to Taoiseach ahead of emergency meeting: ‘Take control of this situation’ 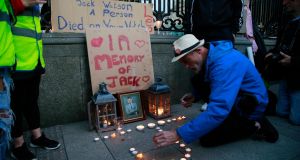 Member of the public attend a vigil for Jack Watson, a rough sleeper who was found dead in Dublin on Thursday morning. Photograph Nick Bradshaw 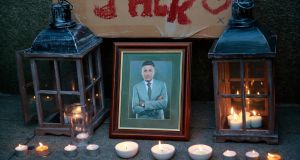 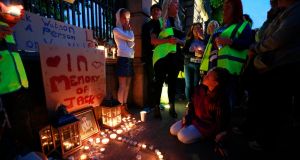 “Jack Watson, a person, died on your watch Leo.”

That was the message for the Taoiseach from the crowd who gathered outside Leinster House Friday night.

Mr Buckley said he did not know Mr Watson who died on Suffolk Street in the early hours of Thursday morning but had stopped to chat to him on the street a few times.

“People like this are just being lost. Before you’re a homeless man, you’re a man. This man worked in Australia. He was a chef. He had a life. But he’s going to go down as a statistic. That’s not okay.

“A man died last night. Not a homeless man, a man,” said Mr Buckley who said he was not a homeless activist but felt compelled to come to the vigil.

The crowd gathered around a framed picture showing Mr Watson dressed in a sharp suit and with a trendy haircut, the result of a photoshoot organised earlier this year to highlight that homeless people are the same as everyone else.

Tea lights were laid out in the shape of the letter J. After a few minutes, a folding table was set up and tea and crisps were on offer for everyone.

Many of those who gathered for the vigil were part of the group that took over Apollo House last Christmas and turned it into a temporary homeless shelter before the High Court ordered them out. Mr Watson was one of its users.

“It wasn’t perfect, it wasn’t ideal but it was an attempt,” said Mr Buckley. “And what did the Government do? They shut it down.”

The mood was one of remembrance as well as anger. It was lost on no one that it was only yards away that Jonathan Corrie died in a doorway in the shadow of Leinster House. His death in 2014 was followed by promises of emergency meetings and urgent measures.

On Friday, there were new promises. Minister for Housing Eoghan Murphy said there would be an emergency housing summit next week of all 31 local authorities and his department’s team.

“This will explore additional measures to help and to house families and individuals currently in emergency accommodation and accessing emergency state supports,” Mr Murphy said.

Glen Gannon recalled that he stood in the same spot three years ago lighting a candle for Mr Corrie.

“I’m sick and I’m tired and I’m fed up of the promises and the kicking the ball down the road,” he said, pointing to the commitment of the previous housing minister, Simon Coveney, that homeless families would no longer have to live in hotels by July 2017.

He called on the Taoiseach to “step up and show us how much of a leader you really are; take control of this situation, don’t kick it down the road. Sort it now and save lives. Be somebody we can be proud of”.