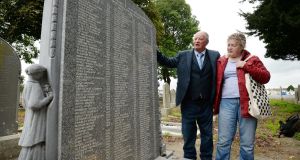 Derek Leinster, born in the Bethany Home in 1938 and chairman of the Bethany Home Survivors’ Group, with Lorraine Jackson, who was brought to the home and adopted after nine months, attending an annual remembrance at Mount Jerome cemetery for children who lost their lives at the home. Photograph: Alan Betson/The Irish Times

Joyce McSharry has a small wallet-sized folder with pictures of her mother Emily. There are several shots, black and white, all belonging to a traumatic past.

In the background is the Bethany Mother and Child Home.

“I was taken from her,” she says, the pain of her life clear in how she speaks.

She is standing at the memorial to 222 children who were buried in an unmarked grave at Mount Jerome cemetery, erected three years ago after prolonged campaigning.

In light rain on Thursday afternoon, about 20 people gathered to pay their respects to those who died, aged from just a few days to three-and-a-half years, between 1922 and 1949.

Joyce was born at Dublin’s now infamous Bethany Home in 1951. Her mother had intended to bring her to Northern Ireland, but she ultimately ended up with a new family who changed her name.

She grew up believing Emily was dead before finding out years later she had become a recluse in England, and was later buried in a pauper’s grave.

Noeleen Belton (75) was adopted at 16 months. She is happy to talk about her lost life but quickly breaks down when thinking of those whom the memorial serves.

“I just never thought I would see the day when this (appeared) in memory of those little souls that never survived. They never survived but I did,” she says.

She returned to Bethany and got her full birth certificate in 1992, which eventually helped her trace her birth mother. “I never got to meet her. I missed her by I think it was three years.”

While the Bethany home was Protestant-run, the main Protestant churches have denied responsibility. The Church of Ireland said it “did not own or run the home”, but the survivors have no doubts as to who took control of their lives.

They are still battling to be included in a redress scheme for survivors of Ireland’s dark religious institutional history.

The bleak purpose of the 2014 memorial, which carries some partial names – Welby, Victory, Carter – and stone carvings of children’s toys, may not yet be complete. Derek Leinster, the principal campaigner behind the Bethany survivors, believes the number of dead children will surpass 300.

He intends to add another layer of marble.

Sitting in McGowan’s pub across from the cemetery before the memorial service begins, it is clear he has taken responsibility for Bethany’s living and dead, having fought for them since the 1990s.

“Over the last 18 years I gave a commitment to people that I would do all I could to make sure they got a government apology, redress, and that the children who were buried in Mount Jerome would not be buried there without people knowing about it,” he says.

“To know that (survivors) are dying off, sadly. . . six months makes the difference,” he explains, referring to those whose memory of the Bethany campaign, and their lives, are fading.

“Sometimes you are frightened to ring them - that you are going to be told they are not there.”