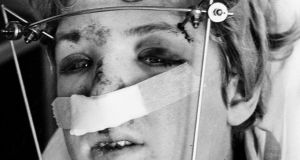 Then: Stephen Ross (15) was buried under the rubble, all of his facial bones broken and the roof of his mouth split open. He lost most of his front teeth, his left leg was broken in several places and his left foot was snapped in half. Photograph: Trevor McBride 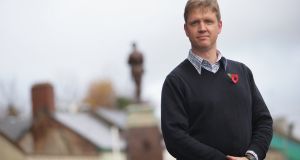 And now: Stephen Ross (45) says that on Wednesday – three decades on – he will be reflecting on how he overcame the darkness and found light. Photograph: John McVitty

As he walked down the aisle with his new wife on August 15th, 1998, Stephen Ross had finally overcome the darkness of the Enniskillen bombing which had left him having to wear a steel mask for a year to rebuild his shattered face.

He was 15 years old when he had joined hundreds of others at the memorial in the town to pay his respects to the war dead when the IRA bomb exploded on that November morning. Twelve people would die in the blast and 63 were left injured, with the teenager among the worst hurt.

Buried under the rubble, all of his facial bones were broken, the roof of his mouth was split open, he lost most of his front teeth, his left leg was broken in several places and his left foot was snapped in half.

Eleven years later and just as he was embarking on a new chapter after marrying Heather, he was to be reminded of the fragility of life when the IRA bombed Omagh town centre killing 29 people, the biggest single atrocity in the history of the Troubles.

“I find it really difficult to watch those pictures and to realise that this happened at the very time I got married. Every wedding anniversary I think of those in Omagh who live with disfigurement and injury and the loss of loved ones from that bombing.

“I was thankful that I lived through the events of Enniskillen to see my wedding day,” he said.

Thirty years ago on Wednesday and Ross – now the father of four children; Megan (12), Ben (8), Eric (6) and Abigail who is 15, the same age he was when he was injured in the bomb – has never stopped being thankful.

“At the very time we stood remembering those who had died and were badly injured in two World Wars, both Catholic and Protestant alike, we did not expect to be numbered among them. I did not feel angry and, rather than focus on why this had happened, I wanted to put what energy I had into getting better and to learn positive things,” he said.

However, the memories of that day still linger.

“I remember so much from that day and it’s impossible to erase the sights and sounds. I shall always remember looking at my watch at 10.43 and, no sooner than I looked up, the explosion went off from behind me; the bang and rushing force, being thrown forward, then the darkness,” he said.

He recalls being pulled out of the rubble by members of the Territorial Army and Ulster Defence Regiment and hearing their reassuring voices amid the sound of screaming women and children looking for each other.

“I remember the taste of blood and concrete grit in my mouth and lifting my hand up to my mouth as I was carried out with four people lifting me. I realised that most of front teeth had gone. I could not open my eyes and I could not feel my left leg at all below the knee.

“It took six people to move a huge slab of concrete that they had been standing on, that slab was propped up by a single brick or block and I was under it curled up in a ball.”

After being airlifted to Altnagelvin Hospital in Derry he underwent a 4½-hour operation before being moved to intensive care for the first week. There he was located beside local man Jim Dixon, who suffered devastating facial and leg injuries, and his headmaster, Ronnie Hill, who would spend 13 years in a coma after he was hit by a wall during the attack – he died in 2000.

“My facial bones were wired together in a metal cage which meant that I could not eat for 5½ weeks. My body weight dropped from 9½ stone to five stone. My chest hurt so much from being on a respirator for a week. Those first few days were the most difficult,” said Ross.

“I remember Mr Hill lapsing into a coma and Jim Dixon, who was in so much pain, pleading with the nursing staff to let him die. I had no knowledge until a week later of how many good people had died that day,” he said.

It was the love and support of his parents, Norma and Graham, vice-principal of Enniskillen High School, that kept the schoolboy going.

“The support of my dad in particular helped me to deal with a lot at that time. He never complained about anything... He is an example to me as a father today,” he said.

It was the prayers of other Christians and the letters he received in hospital that showed him love in the midst of hatred, he says.

About a month after the bomb, he began to reflect on what had happened and how he felt about the people who had planted the bomb or those who supported them.

“As a Christian I quickly realised that there was nothing wrong in acknowledging the pain and emotion, but that such emotions should not be in charge.

“You can only see one small fragment of a tragic event in the jigsaw of your life at a given a moment in time. It’s only years afterwards that you may be able to look back to see how that piece fits into the bigger picture. My feelings and memories of the day do not dictate my life,” he said.

Despite the hardship he said he never left anger set in because of his belief in God.

“I realised from this event that if I let anger take root in my life against God or against the people who support terrorism, that it would ultimately consume me and affect me physically and emotionally. I would only be reacting exactly the way those who planted the bomb would like me to react,” he said.

The bomb, he says, has taught him to live each day to its full potential and be thankful no matter what happens in life.

“Each day is a gift. It has taught me to always be mindful of those who have to live with the loss of their father, sister, bother, son or daughter each day and with so many other tragic events from Northern Ireland’s past. There will be a time for justice and answer to the questions of why I had to go through this experience, but I am not discouraged by the current lack of either and I am happy to wait and trust God.”

Forgiveness is like a key that opens a locked door, says Ross.

“My prayer is that those who planted the bomb or played a part in supporting it publicly acknowledge what they have done and seek God’s forgiveness.

“It might seem perverse for me to say that God views these folks no different to me, and there will be consequences for what they have done, I have been forgiven much and so I can ask God to forgive. I realise others may not feel the same but my sense of justice is on God’s terms and not my own.”

Now 45, Ross lives near Basingstoke in Hampshire, where he works as a pension and benefits manager for a major gas and electric utility company.

He says he is keen for his children to know what happened three decades ago and on Wednesday – three decades on – he will be reflecting on how he overcame the darkness and found light.

“I want my children to be aware of what happened in Enniskillen and to realise that there are as many good people in life as there are those with evil intentions.

“I want my children to always trust that God will always be with them no matter what and their instincts do their best to overcome any obstacles they face,” he said.