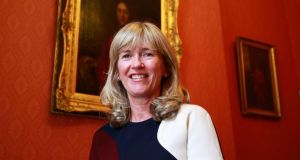 Prof Mary Horgan will on Wednesday become the first woman president of the Royal College of Physicians in Ireland in its 363-year history. Photograph: Nick Bradshaw

It is time to review the HPAT aptitude test Leaving Certificate students must pass when applying for medicine at third level in Ireland, the president-elect of the Royal College of Physicians in Ireland (RCPI) Prof Mary Horgan has said.

“I think there is no evidence that it works one way or the other but what I would encourage is some research to actually tell us that for definite,” Prof Horgan said.

Since 2009, aspiring undergraduate medical students applying to any medical school in the Republic must sit the HPAT-Ireland examination in addition to the Leaving Certificate. This has been justified on grounds that it broadens the intake into medical schools.

“I’m very familiar with this,” Prof Horgan said, adding: “It would be good to review whether it really has made any difference or not in allowing people who are disadvantaged more access.”

Speaking in a personal capacity, she said the test was “an extra stress on students” and “an extra expense”.

On Wednesday, Prof Horgan will become the first woman president of the RCPI in its 363-year history, 350 years after it was granted its charter by King Charles II in 1667.

A consultant physician in infectious diseases and internal medicine at Cork University Hospital, she was dean of the UCC school of medicine from 2014 until this year. She will be the 142nd president of RCPI and is due to serve a three-year term. Originally from Kerry, she graduated from UCD in 1986.

Reflecting on her historic breakthrough she said it was, “as the kids would say, unreal”. She said she felt “humbled” to be elected by her peers and hoped to be a role model for all doctors in training “both male and female”.

“I never saw myself as any different to my male counterparts. I had five aunts who were doctors so it was normal for a woman doing medicine in my family,” she added.

Asked if she is a feminist, she replied: “No, I’m not. I just think if you’re good at your job it doesn’t matter what you are or who you are, what colour, creed, anything. If you do your job properly I don’t think gender matters, quite frankly.”

On Wednesday also the new RCPI council will take office, with a 50 per cent female membership. This, too, was “a sign of the times really where most of our trainees now are female”, Prof Horgan said. At the RCPI, 79 per cent of trainees are women.

Where women in medicine were concerned she felt it was “no different to any other profession”. Women “should do what they want and see where their career brings them and there are so many options in medicine, part-time, full-time, job-sharing, across a huge array. I don’t think other professions have that variety.”

A woman doctor she particularly admires is featured in the only portrait of a woman at the RCPI, Dr Kathleen Lynn, who was involved in the 1916 Rising. Prof Horgan believes the new children’s hospital in Dublin should be named after her.

“She’s an inspiration: Anglo-Irish background, very involved in the Rising. She was the medical officer caring for the rebels and went on to found St Ultan’s [children’s hospital]. So, certainly, somebody I would think is a fantastic person. Doing that as a female in those days was a challenge.

“Wouldn’t it be wonderful if the new children’s hospital was called after her? Why not? We have James Connolly memorial hospital.”

She is herself “a big advocate of vaccines”. She was “privileged to train in the bad old days of HIV and Aids, which is now transformed but made me an even better doctor, given the challenges that we had in the late 1980s and 1990s before there were good treatments.”

She got the flu vaccine last Wednesday “not only to protect me but it allows me protect my patients”.

“And the HPV vaccine: when you are on the front line and see the consequences of vaccine-preventable diseases – and that’s death from influenza, death from cancer of the cervix – it’s very easy for me to be an advocate for vaccines.”

She felt Bishop of Waterford Phonsie Cullinan “could have been better informed” when he recently challenged the effectiveness of the vaccine. “There is really good information out there on HPV,” she added.

Nobody wanted cancer and “we’ve no problem spending loads of money on chemotherapy when it happens but this actually prevents it”.

“And it’s a really good vaccine. I gave it to my daughter before it was even available on the national immunisation programme, because it was so effective and it’s so safe.”

When it comes to issues such as the abortion referendum “we allow the experts in the area to comment on behalf of the college,” she said. As her expertise is in infectious diseases the referendum would be addressed by the RCPI’s institute of obstetrics and gynaecology.

Representatives from the institute will appear before the Oireachtas committee on the Eighth Amendment this week.