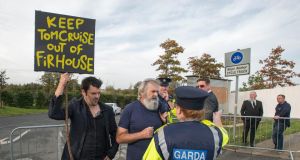 Protesters at the opening of an “Ideal Org” Irish base by the Church of Scientology in Firhouse, on the site of the former Victory Centre. Photograph: Dave Meehan/The Irish Times

A “good natured protest” at the opening of the new Scientology Centre in Firhouse, Dublin, should not take away from the seriousness of “what Scientologists intend for Ireland”, demonstrators said.

As locals stood and watched, a group of about 70 anti-Scientology protesters waved placards and made allegations about Scientology practices which they claimed caused psychological damage and cost members significant sums of money.

Footpaths were closed for about 100m east of the former Victory Centre premises in Firhouse. Roads and traffic barriers and security personnel kept protesters away from large metal gates.

Bill Drummond from England, dressed as a pirate and armed with a loud-hailer, marched back and forth urging the crowd to “hold the line”.

Declan McKenna from Firhouse carried aloft a poster referring to the actor Tom Cruise who is a supporter of the church. Mr McKenna’s poster read “Keep Tom Cruise out of Firhouse”. Further along the protest line John McGhee, “originally form Meath” said he had been out of the organisation since 2008. He said he objected to the “auditing” or counselling practices employed by the community and gave examples of alleged incidents where members had to pay €200 for auditing and fees of some €6,000 for “repair auditing”.

A number of residents of houses along the Firhouse road warned protesters and a growing contingent of media that the gardaí had been called and parking fines would be issues unless vehicles were moved.

‘It should be banned’

The “Ideal Org” as the new centre is called was purchased last year for around €6 million, according to reports. While just 78 people listed Scientology as their religion in the last census the new premises is understood to have an auditorium with capacity of 1,000.

“They are not doing this by accident, they are planning to build a base in Ireland, use the centre to expand their control and influence,” said May Curtis from Tallaght. Ms Curtis said she was never involved with the church but felt “it should be banned”.

“It is good natured but there is a serious thing around what they in there are planning for Ireland,” she alleged.

In a press statement Mike Rinder, a former executive director of Scientology’s Office of Special Affairs, described the Ideal Org strategy as a “real estate, money-making scheme and PR campaign for internal Scientologists.”

David Miscavige, leader of the church since the death of founder L Ron Hubbard in 1986, is understood to be in Dublin for the opening, but attempts to contact the church for a comment were not successful.

During the afternoon a number of people emerged from the premises but requests to speak to the media did not elicit a response.