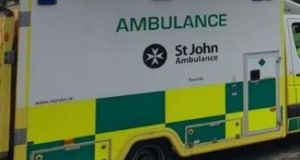 A fifth man who alleges he was sexually abused as a child by a former senior figure in St John Ambulance. Stock image: Twitter

A fifth man who alleges he was sexually abused as a child by a former senior figure in St John Ambulance has reported the alleged abuse to the voluntary paramedic organisation.

The man alleged he was abused by the senior figure in the organisation’s Old Kilmainham division in Dublin from 1989 or 1990.

Last August The Irish Times revealed three men had been abused by the same perpetrator, with those abuse allegations deemed founded following an investigation by Tusla, the child and family agency.

Following media reports a fourth man made a criminal complaint late last year to the Garda claiming he had been abused as a child by the former senior figure.

In recent days a fifth man made a report to St John Ambulance’s child-protection team, claiming he was also abused by the same alleged perpetrator.

The alleged victim, who also spoke to The Irish Times, did not wish to be publicly identified at present.

“The abuse started under the guise of first aid training specifically fixating on the importance of detecting the femoral artery pressure point,” the man said in an email to the organisation’s child protection team.

This gave the alleged perpetrator “the opportunity to ‘inadvertently’ and then purposely touch my penis. He would have me perform the same routine,” he said.

The man said he worked part-time for the alleged perpetrator during one summer and over a Christmas school holiday.

The man alleged the abuse took place on several occasions, both at the alleged perpetrator’s home and while on duty with St John Ambulance.

“He organised trips to a mobile home in Wexford where he encouraged underage cadets to drink. This was my first experience with alcohol, and being drunk. I think I was 12 at the time,” he said.

In the email disclosing the alleged abuse, the man said it had a “severe effect” on him, contributing to mental health difficulties he experienced both as a teenager and an adult.

Two of the other survivors who have come forward claimed they reported their abuse to the organisation at the time in the late 1990s. The alleged perpetrator, now in his 80s, was a senior figure in the Old Kilmainham division, and a member of the organisation from the 1950s until at least 2000, leaving under pressure to resign.

A spokesman for St John Ambulance said it “strictly adheres to a robust child protection policy in accordance with best practice safeguarding guidelines”.

“As part of the organisation’s child protection policy, St John Ambulance has clear and comprehensive reporting procedures in place,” he said.

“The organisation operates a rigorous recruitment process that includes vetting, while all members are required to undertake child protection training and subscribe to a code of behaviour that prioritises the welfare of children at all times,” he said.

If you wish to contact this reporter about The Irish Times investigation into St John Ambulance email jpower@irishtimes.com. All information is treated in confidence.