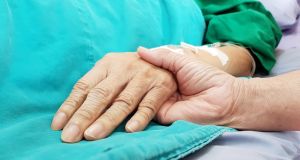 The proposed Dying with Dignity Bill, which seeks to allow people with a terminal illness to be helped to end their lives, was tabled last year by Solidarity-People Before Profit TD Gino Kenny. File photograph: iStock

The proposed Dying with Dignity Bill needs “significant changes” and does not ensure “adequate safeguards” to protect a person’s right to life, the Irish Human Rights and Equality Commission (IHREC) has warned.

In its submission to the Oireachtas Committee on Justice which is considering the legislation, the IHREC calls for any law permitting physician-assisted dying to be guided by “the human rights model of disability” and “extensive discussions” with groups representing certain at-risk people.

The 2020 private members’ Bill, which seeks to allow people with a terminal illness to be helped to end their lives, was tabled last year by Solidarity-People Before Profit TD Gino Kenny and is currently being considered by the committee. The closing date for submissions on the proposed legislation was on January 29th, 2021.

In its submission, the commission underlines that “robust and adequate safeguards are vital” and that before any legislation is passed, a framework must be in place to protect a person’s right to life, right to health and palliative care and right to participate in decision-making.

An “independent oversight mechanism” responsible for reviewing and affirming a person’s declaration that they want to end their life should also be introduced.

In order to ensure a person can die with dignity, the Bill must be “substantively revised to take account of the palliative care needs and wishes of people at the end of life”, says the IHREC.

It also warns of a “significant gap” in the legislation that there is no requirement for practitioners to advise a person of their right to withdraw from the process at any stage despite the “serious and irreversible nature of such a decision”.

Before any legislation of this nature is passed, the State must introduce a legal and regulatory framework, which is compliant with the UN Convention on the Rights of Persons with Disabilities and provides for “supported decision making”, notes the submission.

The terminology that a person “is likely to die” must also be replaced by “a more robust and objective test” such as “reasonable medical judgement”, states the IHREC, adding that the need for “genuine, free and informed consent” must also be recognised.

A “cooling-off period is a necessary and essential safeguard” in any legislation around assisted dying and the committee should consider extending the 14 or six day period proposed in the Bill, it says.

The Bill must also be examined against the adequacy of health and social services currently available to certain groups, says the IHREC. It continues that the proposed legislation be amended so the minister “shall by regulation specify the substances which may be prescribed, the form and manner in which prescription are to be issued and the manner and conditions under which substances are to be dispensed, stored transported, used or destroyed”.

IHREC chief commissioner Sinéad Gibney said that any debate around assisted dying “must have the utmost regard for the complexity of the sensitive and difficult issues being considered” and said dying with dignity was about achieving a peaceful end of life which can include palliative care needs. Legislating for physician-assisted dying relates to several human rights including a person’s right to life, respect for human dignity, personal autonomy and the protection of certain at risk groups, she added.