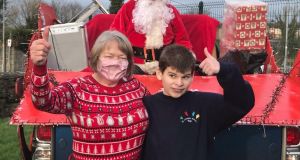 Minister for Education Norma Foley and unions are at an impasse over the return of classes for students with special needs.

The Department of Education abandoned plans to reopen schools for children with special education needs from last Thursday as the two unions involved, the Irish National Teachers’ Organisation (INTO) and Fórsa, did not support the Government plan.

Ireland is the only EU country not providing education to these students, who make up a very small percentage of overall student numbers.

We asked parents of children with special needs how they felt about the current situation. You can find a selection of their responses here:

Trish Johnson: ‘We are struggling (like many parents) to tend to Niall’s needs’

“I am a mother to two children: a girl, Ruth, who is 12, and a boy, Niall, who is nine. Niall has autism. My son is a wonderful child, he is full of fun and mischief and is a really boisterous boy.

He is full of energy and has a lot of sensory needs. He needs to be calmed down a lot during the day. My son follows a routine all the time. He follows it rigidly from 7am to 8pm.

He is calmer and happier when he returns from school every day. School is an essential outlet for all children, but particularly for children who have additional needs. It is an actual lifeline for parents and children. We are struggling (like many parents) to tend to Niall’s needs, as he is not getting any therapies either while this lockdown continues.

I also feel extremely sorry for my daughter, Ruth, and any other siblings of children with needs as all the parents energy and time is focused on the child with special needs. In actual fact, I often find these children suffer more than we realise. Juggling it all is very difficult. Parents get absolutely no break. At the end of the day we are emotional and exhausted.”

Eddie Cadman: ‘He really needs to be back in school for his own safety and sanity’

“I have a family of five kids. Our 12-year-old is called Nathan and is autistic and also suffers from ADHD, Klinefelter syndrome and very bad sensory disorders – especially with smells which limits him to certain rooms in the house.

During the first lockdown he regressed so much that he used to wake up at 11pm and would scream and shout out until around two, three and sometimes four in the morning so we did not get much sleep.

As time went on his frustration and tantrums got worse and more frequent and even got to the point where on two occasions he put his hand and foot through a window thankfully not needing [the emergency department], but he needed medical treatment.

He really needs to be back in school for his own safety and sanity.”

Justin and Siobhán Deegan: ‘She can see it from her bedroom window, points at it and says “school”’

“Our daughter, Laura, is six years old, and autistic. Additionally she is non-verbal. These lockdowns, have been tough on her, and us as a family. Laura is an only child, so the safe social environment of the school is hugely important to her.

Since lockdowns however, this is how her world has become. It is smaller. No friends her own age. Her closest pals are her mum and dad. Her grandparents can’t currently see her aside from on video. Her school the same. With this shrunken world, monotony gnaws away at all the progress witnessed before.

Meltdowns become frequent. Hitting out too. Remote learning does not apply to us here. It is of no help whatsoever. Socialisation is the spur which helps Laura settle in to learn.

Laura still doesn’t know why she’s not in school. She can see it from her bedroom window, points at it and says ‘school’. It’s heartbreaking. There is so little difference between the weekend and weekdays. It’s just one, seemingly infinite sojourn right now. We don’t blame the teachers. We share the same concerns as they do, after all.

As far as the Government is concerned, just lay out a clear plan. Even if it means a March return, we don’t care. Just show they’re on top of this. They do know what people are going through. That’s obvious.”

Niamh O’Brien: ‘Each week we arrange carers and childminders to help our daughters.’

“We have three daughters. Orla is 15 and in 3rd year in secondary school. Lucy is 13 and in first year in the same school; she has a rare and severe brittle bone disorder called osteogenesis imperfecta that results in significant physical disability and extremely small size and short stature and has a full-time SNA at school. And Annie our youngest is six years old and has severe non-verbal autism and attends a small special school in Galway, Ábalta.

This past year has been such a challenge. I am a GP working on the front line to look after my patients, thus is my privilege and duty. My husband works full-time and now works from home. Each week we arrange carers and childminders to help our daughters.

Annie has a lot of challenging behaviours, so much of our time at home is spent managing those and keeping her at a distance from Lucy, for whom an injury could be really serious even lethal. For example, Annie tends to pull hair very hard and this could injure Lucy’s neck and the situation is causing a lot of anxiety to Lucy.

Children in special schools are at a significant disadvantage and being denied their human right to education, as they are not able to work remotely.”

Stephanie Kavanagh: ‘School is a lifeline’

“My son is seven with severe autism and a moderate intellectual disability. I have three other children 11, six and three (also has autism ).

The last lockdown resulted in massive regression for my son, hospital visits and medication to help with his anxiety. Having school structure in place when everything else he loves is no longer available is the lifeline we needed.

He can be very aggressive to himself, us and my other children. He has always had challenging behaviours. He bangs his head against the wall and bites his arm in frustration.

He relies on routine and structure. School is much more than education to him it’s interaction, stimulation and opens up his world to other people to engage with. School is a lifeline; it’s six hours of his day where other people are engaging with him.”

Emma O’Sullivan: ’We’re trying to . . . be the voice of our children without voices’

“As a mother of two sons with autism, we’re isolated enough as special-need parents, but this back and forth union stuff is absolutely heartbreaking. People voicing negative comments towards us when what we’re trying to do is be the voice of our children without voices.

These attacks are making parents feel worthless because they want kids in school. What some people don’t realise it’s not that we want our vunerable special needs children in school during a pandemic, but it’s that our kids need the routine of school while in this pandemic.”

Dora O’Kane: ‘I’m sure he has given up hope’

“Jamie has a diagnosis of autism, moderate intellectual disability and is non-verbal. He has regressed immensely since the school closures over the last year. He has finally stopped signing the word school I’m sure he has given up hope. He spends his day looking out the window.

His frustration has led to violent outburst due to his inability to communicate and we have had to send his sibling to stay with a family member in another country as it was impossible to try and do any form of home schooling with her due to his increasing volatile situation.”