April 13th, 2016: On the streets: The detritus, human and otherwise, of open drug injecting is visible across Dublin city centre on any morning 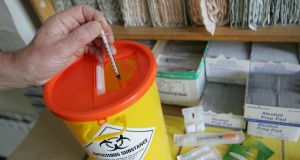 The development of the State’s first supervised injecting centre has been dealt another blow, following a ruling that planning permission would be required to use either a Dublin City Council or a HSE facility for the centre.

Earlier this month Dublin City Council ruled that the properties of two charities, Merchants Quay Ireland and the Ana Liffey Drug Project on Abbey Street, could not be used for the drugs centre unless planning permission was obtained.

However, the council has now determined that one of its own facilities, a homeless shelter on Fitzwilliam Street, and a HSE property on Pearse Street, would also need planning permission for on-site drug taking.

The Health Service Executive last August issued a tender seeking a provider to run a medically supervised centre on a pilot basis for 18 months, under legislation passed by the Dáil earlier this year.

Users of the facility were to be permitted to inject illegal drugs, obtained elsewhere, under the supervision of trained health professionals.

Merchants Quay Ireland and the Ana Liffey Drug Project on Abbey Street both applied for the tender, which was due to by awarded early this month, with a view to opening the facility towards the end of this year.

However, city business organisation the Temple Bar Company sought a declaration from the council that the centres would require planning permission. The council ruled that the opening of injecting facilities at either Merchants Quay Ireland or the Ana Liffey Drug Project on Abbey Street would not be exempt from the requirement to have planning permission.

The Dublin Business Alliance, a business group that includes the Temple Bar Company and the Restaurants Association of Ireland, separately sought declarations that the HSE’s National Drug Treatment Centre on Pearse Street and the former Longfields Hotel on Fitzwilliam Street would also not be exempt from needing planning permission for injection centres.

The HSE would not say if it intended to use its premises for an injecting centre. “The evaluation stage of the procurement process for the pilot supervised injecting centre is ongoing and it is intended to announce the successful bidder in December,” it said. “The HSE will not be making any further comment until the procurement process is fully completed.”

Adrian Cummins, chief executive of the Restaurants Association said it was important to establish the principle that such facilities needed full planning permission.

“It was our understanding that these two properties were under consideration for the injection centre. What has been established now is that any plans will be fully aired in public, through the planning process, and that a centre won’t just pop up.”