State readies itself for 2,500 extra refugees under EU programme

Despite sluggish start, State’s intake of refugees ramped up over the latter half of 2017 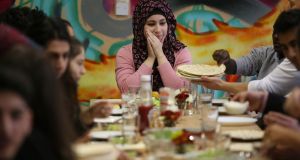 The Irish target of welcoming 4,000 people is small compared with Germany’s commitment to welcome nearly a million. Above, a Syrian refugee at a German-language programme in Berlin. Photograph: Sean Gallup/Getty Images

On September 23rd, 2015, then minister for justice Frances Fitzgerald said the State was “fully committed to playing our part in addressing the migration crisis facing Europe”.

Ms Fitzgerald said the government would ensure all people arriving from Greece, Italy and other refugee camps were provided with “appropriate support” and that Ireland would respond “comprehensively” to the “critical humanitarian challenge” unfolding across Europe.

Her comments came two weeks after the government agreed to accept up to 4,000 people from Lebanon as well as European ports of entry in Greece and Italy under EU resettlement and relocation programmes. The new scheme would run for two years, until 2017, and priority was to be given to unaccompanied minors.

Meanwhile, at the far end of Europe, more than a million men, women and children were arriving on the sun-soaked shores of the Greek islands of Lesvos, Chios, Samos and Kos, after risking their lives crossing the Aegean Sea. Hundreds of thousands of these – mainly Syrians and Iraqis – continued their odyssey on foot, embarking on an equally hazardous journey across mainland Europe, prompting images reminiscent of the millions displaced by the second World War.

In December 2015 Angela Merkel described the migration crisis as a “historic test” for the European Union. Earlier that year the German chancellor opened her nation’s borders to almost 900,000 asylum seekers.

In Ireland, as ministers dithered about where to house the incoming asylum seekers, the Irish public took matters into their own hands. The advocacy group Uplift set up a website calling on people to “pledge a bed” for the new arrivals, resulting in more than 800 offers of accommodation.

The Irish Red Cross was given the role of vetting the offers and spent the following year sifting through pledges of accommodation, goods and services across Ireland. In May 2016 Irish Red Cross chief executive Liam O’Dwyer told The Irish Times that in most cases “people are ready and the accommodation is there”. However, it would take months before the first handful of refugees began moving into Irish homes in 2017.

Progress in resettling people from Greece was slow, with the trickle of arrivals picking up some momentum in early 2017. Since February, 15 flights carrying 591 asylum seekers have landed in Ireland under the State’s Irish Refugee Protection Programme. No asylum seekers have arrived from Italy; the Department of Justice has blamed the “refusal of Italy to allow security screenings” for the delay.

Emergency reception and orientation centres opened to provide temporary accommodation for the new arrivals. Initial arrivals were sent to the Hazel Hotel in Monasterevin, Co Kildare, and Clonea Strand Hotel in Dungarvan, Co Waterford, while those who came in early 2017 were sent to the Abbeyfield hotel in Ballaghaderreen, Co Roscommon. Others had to stay in direct provision centres such as Mosney in Co Meath.

Irish refugee support groups warned that many of these asylum seekers, particularly women and young girls, would require counselling and additional healthcare resources, having endured treacherous journeys and suffered sexual and physical violence.

The Irish target of welcoming 4,000 people may have seemed unambitious considering Germany’s commitment to welcome nearly a million, but Irish programmes nonetheless got off to a sluggish start, with just over 300 places allocated midway through 2016.

This was largely due to processing difficulties at EU level and, following on from initial complications, the intake ramped up over the latter half of 2017, with more than 2,000 new arrivals expected to be in situ by early 2018.

Of the almost 1,200 refugees listed as having been housed in the community by the end of this year, just 15 will have found homes in Dublin, with the rest dispersed around the country. This compares with 140 slated for Sligo, 113 in Mayo and 109 in Cork.

Despite the hundreds of pledges of assistance from members of the public to provide rooms, beds and apartments, a ministerial briefing paper published by the Department of Justice in June identified the inability to find suitable accommodation for those moving out of reception centres as an emerging issue.

Still, the Government is keen to ratchet up the rate of community housing placements for those leaving the centres, with 300 relocated refugees destined for Kildare in 2018, 190 for Wicklow, 180 for Meath and allocations for other counties, too, as the State readies itself for an intake of 2,500 extra arrivals over the coming months and years.

The Department of Justice did not respond to a request for comment from The Irish Times.