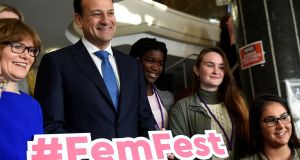 Equal pay, imposter syndrome and mental health were some of the topics discussed at a women’s conference on Saturday organised by the National Women’s Council of Ireland. The women on the panel discussed the “struggle” women face when asking for equal pay.

Dil Wickremasinghe, social justice and mental health podcaster, and who was chairing the panel, said for 10 years she had been working in Newstalk but “didn’t feel a sense of belonging”.

Sinead McSweeney, managing director of Twitter in Ireland, said “having the confidence” to discuss pay with employers is a start, but it’s not the only solution. Ms McSweeney said it is important for employers to make sure they are not undervaluing female employees.

Louise McSharry, RTÉ 2fm presenter said she addresses pay discussions by thinking, how would a man approach this meeting? “At the end of the day you need to remind yourself it’s a business conversation, it’s not personal,” she said. Ms Wickremasinge said it’s important to understand that it requires practice.

“At the age of 44, I still get it wrong. . . It’s a work in progress,” she added. Asked about imposter syndrome, which is a feeling individuals have of being a fraud or not deserving of their job or position and is common among women, Ms McSweeney replied she’s “had it at different stages in my life. There’s no point in pretending that it doesn’t go away.”

However, she added that it is something that some men struggle with as well. “In some ways true feminism is about liberating the femininity in our male colleagues and family members.”

Speaking to attendees, Siona Cahill, deputy president of the Union of Students in Ireland said: “Women in leadership are most often by definition difficult . . .” In her speech, Ms Cahill said leadership had been associated with being “a brass and crass and loudmouth term” but “leadership isn’t about taking over space, it’s about creating space”.

Ms Flynn said she didn’t accept who she was until she was 25 years of age. “In my community, life is a lot harder for Traveller women. And we tend not to speak about it. In 1992, we had a 13-year-old woman who got raped, the X case. But very few people know it was a traveller girl,” she said. “I’m trying to educate people . . . everybody is different. I didn’t feel good enough in society for 25 years. I educated myself, which wasn’t easy,” she said.

Samiya Mooge (23) is doing her Masters in Social Work in Trinity College Dublin. She moved to Ireland from Somalia when she was two years old. “I came to Ireland when I was a two-year-old as a Somali refugee and so I’ve spent most of my life here. I don’t know any other life other than Ireland,” she said.

“I think events like these are really, really important because it brings together young women and it shows them that yes, you are important, and it makes them feel valuable that this whole event is for you, to raise your awareness, to empower you and to allow you to network with other strong women, but I do think it’s lacking in a lot of ways.

I was still the same person, I just had a cloth on my head, that was it

Ms Mooge started wearing the hijab when she was in secondary school, and that’s when things started to change. “In primary school I never really felt that I was different, because I had the [Irish] accent, I was familiar with the culture and everything. Everybody treated me the same. But in secondary school I started wearing the headscarf and that’s when I started to feel that I was different . . . I could feel a difference in my friends’ behaviour towards me, like they had to walk on egg shells, which was not the case. I was still the same person, I just had a cloth on my head, that was it.”

Last year, Ms Mooge was on the luas with two of her friends on a Saturday night when a man started hurling abuse at them. “The luas line was packed and this man – I was with two other Muslim friends, we had just come from dinner – who looked to be in his 40s, started shouting, screaming and cursing at us, saying, ‘go back to your own country, you f****** Muslims, you f****** refugees you’re ruining everything’. And we were just there like, ‘what?’

“It was such a shock because I had never really experienced this. And it was so frightening because he was so aggressive; and the thing that hurt more was that the luas line was packed on both sides, but not one person stepped forward to say ‘stop, what are you doing?’ We were three young girls, I was just 22 and this was a big man. He was tall, muscular and we really feared that he was going to be physical. Until he walked away, we didn’t feel safe. We were shaken up for a good while. And it was scary to think that he could have done anything and nobody would have done or said anything.”

Eboni Burke (17) was born in Tipperary and is half American. She said she struggled to come to terms with her mixed race identity.

“I get a lot of ‘so where are you really from’ kind of questions. And ‘are you really Irish?’ And I would say, ‘actually yeah, I’m from Tipperary’,” she said. She took part in a campaign called #IAmIrish this year and up until then she didn’t have “a lot of pride” in herself being mixed race. “I found it really difficult to cope with, but now I’m coming to terms with it.”

Ms Burke said FemFest has provided her with an atmosphere of “building each other up instead of tearing each other down. It’s really what feminism is all about and I love it,” she said.

Demilade Adeniran (15) is in fifth year and had been asked to speak at the conference. She moved to Ireland from Nigeria when she was a couple of months old. “I’m Nigerian and Irish, so I combine the two. There’s something in the Nigerian community in people my age, they don’t take pride in being Nigerian, they just want to claim Ireland, but I think that your roots are very important and you shouldn’t be afraid [to be both]. You should be able to take pride in two countries,” she said.

FemFest is a women’s conference organised by the National Women’s Council of Ireland for women between the ages of 16 and 25, to discuss issues of leadership and equality.