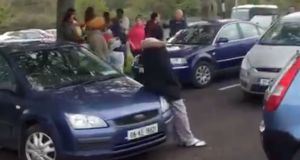 Protesters blocked the entrance to Mosney with a number of cars.

Dozens of residents of the Mosney direct provision centre held a demonstration at the entrance to the site on Thursday and blocked management from entering.

Residents from the Co Meath centre near Drogheda gathered at the front gate of the site between 7am and 10am calling for management to listen to their “cry for help” around the conditions and treatment of asylum seekers in the centre.

The protest had been organised by residents who met on Wednesday night following the hospitalisation of a single mother residing at the centre. It is understood the woman arrived in Ireland two months ago seeking asylum and was initially housed in Mosney. She was then transferred to a centre in Cavan but requested that the family be returned to Mosney because of her son’s health. They returned to Mosney after a local councillor intervened on their behalf but the mother was brought to hospital on Wednesday, according to the Movement of Asylum Seekers in Ireland (Masi).

It is understood the transfer of another male resident to Longford last night played a role in the decision to hold the protest.

One woman who took part in the demonstration and prefered not to be named said about 20 residents gathered at the front gate at 7am and used cars to block the entrance. She says the group increased to between 30-40 people as management arrived at the centre. The woman claimed that management refused to respond to calls for a meeting to discuss grievances at the centre.

“He told us we were blocking public transport but we just said ‘can you listen, this is a cry for help? Give us an audience, that is all we’re asking’.”

The owner of the centre later arrived at the gate and gardaí were called to the scene.

One video of the demonstration posted on Facebook shows a number of cars blocking a long queue of vehicles from entering the centre while a second video shows a resident shouting “we just want to be heard” with a member of staff responding “I want these cars cleared”.

“The main issue is that management needs to treat people as humanely as possible,” the female participant told The Irish Times. “They need to understand that everyone here has their own frustrations, that it’s not an easy system to go through, but they need to have a listening ear. They instil a fear in people that if you say something you’re going to be transferred. That’s a complete upheaval of your family, that’s what they do to silence people.”

A Facebook post from Masi agreed that most residents are “fearful and reluctant to raise issues they have with management because the minute a person complains, they are moved to another centre”.

Masi calls in the post for the Department of Justice to “abolish” the direct provision system and “treat people with dignity”.

“After 20 years and many suicides we’re tired of mourning asylum seekers who are pushed to limits by staff who do not respect their right to dignity. Ireland used to treat international protection applicants humanely.”

Representatives from the Reception and Integration Agency visited Mosney after they become aware of the protest and met with management and staff, a Department of Justice spokesman said. “In keeping with established practice RIA staff are available to residents in all centres to discuss any issues or concerns they may have,” he said.

A Garda spokeswoman confirmed that gardaí had attended “a small protest at a direct provision centre in Meath” at about 8.30am on Thursday. The demonstration “concluded peacefully” and no injuries or arrests were reported, she said. Management from Mosney Direct provision centre, when contacted, said they did not wish to comment.