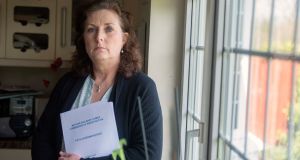 Carmel Cantwell, whose brother died shortly after he was born in Bessborough mother-and-baby home in Cork in late 1960. Photograph: Michael Mac Sweeney/Provision

More than 20 years ago, Bridget visited the former mother-and-baby home, Bessborough, seeking to find where her son, William, had been buried after his death late in 1960.

She remembers nuns from the Congregation of the Sacred Heart of Jesus and Mary bringing her to a burial plot on the grounds in Blackrock in Cork, and telling her that was the place.

“She always wanted to place a plaque there,” Bridget’s daughter, Carmel Cantwell said. “She was refused at the time. But four or five years ago we brought a plaque in in his memory.”

The family were surprised when they read the fifth interim report of the Commission of Investigation into Mother and Baby Homes this week. On page 36, the report mentions a woman who contacted the congregation in 1994 making a formal inquiry about the burial place of her child, who died in December 1960.

“In 1994, a member of the congregation told the mother of this infant that her child was buried in the congregation burial ground at Bessborough,” the report says. “However, records held by the administrator of St Finbarr’s Hospital at that time recorded the child’s place of burial as Cork District Cemetery, Carr’s Hill.”

Cantwell said her mother (77) was almost certainly the woman referred to in the report, and that the family was very upset to learn that William was likely buried in a “pauper’s grave”. She understands he was the only baby who died in Bessborough in December 1960.

“She doesn’t want to believe that he could be buried anywhere else,” Cantwell said of her mother. “The nuns brought her down to Bessborough over 20 years ago and pointed to a place where they told her her baby was buried.”

Cantwell has emailed the commission to ask them to clarify the information listed in the report. William, Cantwell says, was born healthy but his condition deteriorated after three days and he later died. Bridget remembers him being buried on the same day and being given no opportunity to be with him.

The report says there is evidence that some 900 babies died at the Cork home but that burial records could only be found for 64. The commission believes that babies were almost certainly buried on the site, but has ruled out excavations or searches for remains taking place on it.

Cantwell, from Rochestown in Cork city, said she felt intense frustration and anger when she read the report.

“There is an opportunity here to do a lot of healing with families and mothers. There are still nuns alive who were there all during this period,” she said.

“This is just as raw to my mother as it was back then.This takes its toll on my mother. It is something so personal and private to her.”

The family wants Minister for Children Katherine Zappone to intervene in the case and confirm what they now suspect.