‘It’s all about money,’ says family of one resident regarding closure of facility 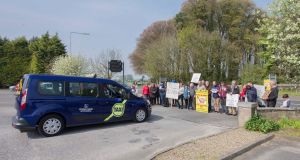 The blockade, which lasted more than an hour, at the Rosalie Unit in Castlerea when the first of 12 residents was being transferred to an alternative facility. Photograph: Brian Farrell

Anita Flanagan felt as if she was at a funeral as she and fellow locals walked alongside a wheelchair-accessible taxi making its way through the streets of Castlerea last week.

A woman in her 60s was being involuntarily transferred out of a HSE long-term psychiatric care facility known as the Rosalie Unit in the Co Roscommon town.

After years of concerns, the HSE announced last week that, following a a medical review of the facility, it had decided to shut it down. The residents, most of whom have lived there for many years, are to be moved to an alternative facility at a nearby nursing home.

About 50 relatives and neighbours of residents at the unit formed a human barrier in a bid to thwart the move. The stand-off lasted more than an hour, during which the woman, accompanied by a nurse and a healthcare assistant, sat in the taxi, its engine running, as it was blocked in by demonstrators.

Flanagan was there with her husband, Bernie, and son Owen, in support of her brother Dan Connaughton (70), who has schizophrenia and also lives in the Rosalie Unit. They say he is living in fear, with no idea when or where he will be moved.

“He rings us four or five times a day now. He never used to do that,” says Owen.

“The staff told me not to mention it to him when the news broke last week, but he rang me and thanked me for standing up for him on local radio. He knows exactly what is going on and he’s really stressed,” says Anita.

The protest was also attended by Jean Anderson from Ballaghaderreen, whose brother Terry (65) lives in the unit.

“Some of the other residents are like his siblings, he knows them so well,” she says. “We are determined to fight this, as it’s not fair and we have to be advocates for people who are vulnerable.”

Fianna Fáil councillor Paschal Fitzmaurice, who organised the protest, said they eventually had no choice but to allow the woman to be driven away after gardaí and HSE management told them there was a High Court order in effect directing the transfer.

There had been speculation many times in recent years that the unit might close, not least because numbers have dropped from 34 to just 11 after Thursday’s departure. A policy of no new admissions has been in operation since September 2016.

Each time closure was mooted, the community rallied. The demonstrators say they had received assurances in the past from then minister for health Leo Varadkar and former minister of state Kathleen Lynch that it would remain open.

Local anger is exacerbated by the fact that another psychiatric facility in the town, Knockroe House, was closed five years ago.

Flanagan says her brother has suffered enough in his lifetime and deserves better. He has lived at the unit for about five years.

“I cannot tell you how good the staff were when he had the transplant,” she says. “To move him from here would be like an eviction.”

She is also puzzled by the HSE’s conclusion that only two of the patients now require inpatient psychiatric care “in a different setting”, while the needs of the remaining 10 are for general nursing care.

In a press statement last week , the HSE described the centre as “a community psychiatric unit for the ongoing care of patients with severe and enduring mental illness whose assessed needs cannot be met safely in any other community setting”, Flanagan notes.

“Have there been miracle cures as far as the other 10 are concerned?” she asks. “It’s all about money.”

In a statement, the HSE said individual plans in respect of the future care arrangements for each resident will be discussed with them and their next of kin “in order that the individual needs of the residents can be met in the most comprehensive way and in the most appropriate setting”.