Budget 2021: Inequality will increase, poor will be left behind – think-tank 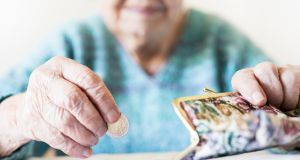 SJI welcomed the increase in carbon tax and fuel allowance but said this was not enough to address fuel poverty. Photograph: iStock

Inequality will increase with poorest left further behind as a result of Budget 2021 – an outcome that is “totally unacceptable”, warns the equality think-tank Social Justice Ireland (SJI).

In its post-budget analysis it expresses “regret” that core social welfare rates remain unchanged for the second year in a row, when food and fuel prices will rise and incomes expected to increase by at least two per cent next years.

Despite “progressive changes” to some payments, including increases in the living alone allowance, fuel allowance and qualified children payments, “there will be large numbers of people depending on core social welfare payments who do not qualify for some or all of these allowances who will definitely be left behind”.

The pandemic has underlined key issues which SJI has focussed on for many years it says, including the importance of the welfare system as a safety net for all; the inadequacy of most welfare rates; the serious struggles faced by low-paid workers; the widening divides between those in precarious work and in secure positions, and the serious underfunding of public services especially in health and social care.

It argues core social welfare rates should be pegged at a level equivalent to 27.5 per cent of average weekly earnings, as a minimal floor income and the budget should have made a start by increasing basic rates by between €7 and €21 per week.

Was there anything in it for you?
Inside Business with Ciaran Hancock · Budget 2021: “unprecedented in size and scale”

Young people out of work and people with disabilities are of particular concern, given youth unemployment of 36.5 per cent compared with about 12 per cent among other age groups and that one in three individuals with a disability is in poverty.The disability allowance and jobseekers’ benefit for those under 25 should have been increased, says SJI.

On housing, the organisation welcomes an additional €22 million for homeless services – last year €185 million, or over €500,000 a day was spent in this area – but regrets the plan to build 9,500 social homes next year. This target is “too low” it says.

Over-reliance on the private-rented sector continues says SJI, which is “disappointed” at the continuing allocation of billions to the sector. A total of €2.4 billion for an additional 15,000 housing assistance payment (HAP) and 800 rental accommodation scheme (RAS) tenancies, was announced on Tuesday. SJI “regrets” the extension of the help-to-buy scheme.

While welcoming the increase of the carbon tax from €26 per tonne to €33.50 per tonne, the pathway to €100 per tonne by 2030, and the fuel allowance increase, these are “not enough to address the problem of energy poverty” especially in low-paid households and those on welfare who do not qualify for fuel allowance.

Resources to prepare for Brexit are welcome. However not enough is planned to protect the poorest households which will be hardest hit by increases in food and fuel prices in the likely event of a hard break.

Quoting the Economic and Social Research Institute, it says food costs could go up by between €892 and €1,360 per household per year. Food costs represent 40 per cent of outgoings in poorest households compared with 18 per cent in wealthier homes.

“Social Justice Ireland regrets that Budget 2021 only increased the minimum wage by 10c per hour.”

The expansion in the school hot-meals programme is welcomed, to benefit about 35,000 more primary school children from next year. But there is “regret” at no additional supports for DEIS schools – “required to ensure that gap between DEIS (delivering equality of opportunity in schools) and non-DEIS schools does not widen as a result of Covid-19.”