Death of ‘giant of the left’ Seán Garland marked in Glasnevin 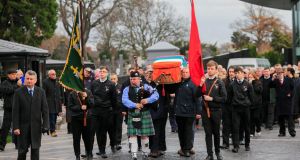 Séan Garland was “a giant of the left in Ireland”, Workers’ Party ard comhairle member Mickey McCorry said at a memorial service in Dublin’s Glasnevin cemetery on Tuesday.

He “defined his politics, as he said himself, not in any school, not in any university, he defined it in the many jails that he served time in”, Mr McCorry said.

Derry woman Marian Donnelly, also a former Workers’ Party president, recalled how “Seán was born in north-inner-city Dublin in 1934. He lived with his parents, brothers and sisters in a one-roomed tenement in Belvedere Place.” His mother had a stroke after he was born and his father was in an accident, which restricted the jobs he could do.

Those early experiences “were to influence the shape of Seán Garland” and his “resolve to change the world around him for the benefit of working people and their families”, she said.

He joined the IRA in 1953 and “in an abortive raid on Brookeborough police station in Co Fermanagh, two of Seán’s comrades were killed in a gun battle”, Ms Donnelly said. “And, though himself seriously wounded, he carried one of the injured to safety at great personal risk.”

After his discharge from hospital, he was sentenced and sent to Mountjoy Prison. After his release three days later, he was interned in the Curragh camp. “He was later to be arrested in Belfast, where he spent four years in Crumlin [Road] Gaol,” she said.

He played “a leading role in one of the most significant political reviews of modern times”. With others, “he rethought the concept of republicanism in the modern era and firmly rejected the narrow nationalism which had left the republican movement isolated”.

This transformation of the republican movement and the adoption of a socialist programme met with much opposition “but Seán Garland was not for turning”, Ms Donnelly said. Throughout, he “had to contend with political betrayal and treachery”.

“When the Provisionals broke away in 1970, it was to be the first of several such betrayals.

He was “ instrumental in the IRA ceasefire of 1972” but also suffered “at the hands of the ultra left. He was to be badly wounded in an assassination attempt in 1975 near his home in Ballymun. ”

As general secretary of the Workers’ Party “he was to be instrumental in making it one of the most powerful and successful left-wing parties Ireland had ever seen”. It soon had “seven elected TDs, a Dublin MEP and numerous councillors in local government”.

Then, “in a further act of betrayal”, the party split in the early 1990s, “with all but one TD leaving to form the Democratic Left”.

He was a “staunch internationalist” and “a fierce and able critic of US foreign policy”. In 2005 he was arrested in Belfast on foot of a US extradition warrant. Released on bail, he returned to Dublin where, in 2009, he was again arrested on another US warrant and spent two weeks in prison before release on bail.

It was “testament to the esteem in which Seán Garland was held that so many people from so many walks of life pledged their support”, Ms Donnelly recalled. The campaign was successful.

She concluded by thanking Garland “for your great determination on behalf of working class people everywhere. Thank you for never flinching and the legacy that has left us.”

Ard Comhairle member Gerry Grainger said “Seán’s passing marks the end of the life of a principled revolutionary, a man unceasingly dedicated to the cause of the working class”.

Rev Chris Hudson, Minister at All Souls Unitarian Church on Elmwood Avenue, Belfast, recalled the line from Ecclesiastes about there being “a time to love, and a time to hate; A time of war, and a time of peace.” He said, “Seán knew instinctively that message. He didn’t have to learn it. It was in his DNA.”