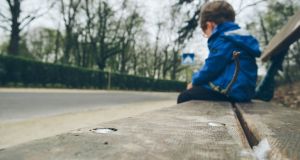 Barnardos said little progress had been made in delivering on a Government commitment to lift 100,000 children out of poverty by 2020. Photograph: iStock

Almost one in every five children in Ireland still live below the poverty line despite the improving economy, Central Statistics Office (CSO) figures have shown.

Data published on Monday shows a slight reduction in the rate of consistent poverty, but charities have pointed to serious ongoing concerns regarding the country’s most vulnerable people.

Responding to the figures, the St Vincent de Paul (SVP) pointed out that children and lone parents in particular are facing high levels of poverty and have been prominent among the 1,000 daily calls it has been receiving in the run up to Christmas.

The 2017 Survey on Income and Living Conditions published by the Central Statistics Office (CSO) shows an overall decline in poverty and deprivation.

Those found to be at risk of poverty dropped by half a percentage point, but at 15.7 per cent the rate still means more than one and a half people in every ten falls into the category. The minimal decrease is not considered to be statistically significant.

Enforced deprivation - a condition defined as those unable to afford two or more specific indicators such as adequate home heating or buying presents for people at least once a year - was at 18.8 per cent (down from 21 per cent in 2016).

The most common types of deprivation experienced by Irish households are an inability to afford the replacement of worn out furniture, to have family or friends for a drink or meal once a month, or a day out in the last fortnight.

The consistent poverty rate - which includes those who are at risk of income poverty while also experiencing enforced deprivation - was at 6.7 per cent last year, down from 8.2 per cent.

SVP acknowledged a modest improvement in the situation but raised the “stark reality behind the statistics as struggling families face into Christmas”.

“The position of many people in private rented accommodation remains of grave concern,” said its national president Kieran Stafford.

“Increasing rents mean that households are going without essentials as they prioritise their rent payments over other expenses for fear of losing their homes.”

The charity also said that thousands of homeless children in hotels and hubs, as well as those in direct provision centres, did not show up in official statistics which measure households only.

Barnardos, the children’s charity, said little progress had been made in delivering on a Government commitment to lift 100,000 children out of poverty by 2020.

“Poverty increases the chances of a child experiencing homelessness, domestic violence and emotional abuse; these in turn increase a child’s chance of experiencing poverty in later life. It is a vicious cycle from which many children never escape. Yet it is not inevitable.”

The Children’s Rights Alliance (CRA) said poverty rates are moving in the right direction and estimated that latest figures show about 24,000 children had been lifted from poverty over the year, the greatest decrease since the recession.

“Too many children in Ireland are living with the shame of poverty,” said chief executive Tanya Ward, “They learn not to ask their parents for anything.”

However, Ms Ward said the figures showed the Government’s strategy to free children from poverty actually is working and must remain a political priority.

“Increased access to medical cards for children, free school books and hot meals in early years’ and school settings will help bring this figure down,” she said. “We’ve lived for far too long with child poverty in Ireland. The time has come to eradicate it.”