Orphaned children with disabilities from the worst affected area of Chernobyl visited President Michael D Higgins as they arrived with their Irish families for the Christmas period. 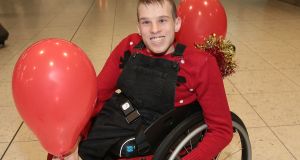 Ihar Shadzkou from Belarus as he arrived with Chernobyl Chidren at Dublin Airport to stay with families across Ireland for Christmas. Photograph: Brian McEvoy 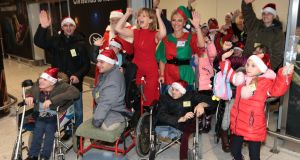 Ihar Shadzkou (18) was jubilant when he was surprised with a new custom-built wheelchair on arrival at Dublin Airport for his annual Christmas visit from Belarus on Tuesday.

“His legs are too long [for his old chair] and they’re hitting along the ground” which was causing him cuts and infections, said Marie Cox from Castlebar, Co Mayo, who has hosted Ihar every Christmas and summer for the last 10 years.

There were smiles and tears as some 40 children from Belarus, who have disabilities related to the Chernobyl nuclear disaster, to arrive at Dublin Airport to spend Christmas with Irish host families.

The annual visit is organised by Chernobyl Children International (CCI) which has been connecting Irish families with victims of the 1986 disaster for nearly 30 years.

“We all gather here each year to meet these special children because these children live in a segregated environment, incarcerated in a mental asylum where there is no room for their development as an individual person,” said the organisation’s volunteer chief executive Adi Roche.

“The only time they have an experience of being with a family, of being in a community, of being loved, of getting a feeling that they matter as a human being is when they come to Ireland,” she added.

Many of the children who arrived on Tuesday afternoon referred to their host parents as “Mama” and “Papa” as they embraced.

“For us, Igor’s part of the family so Christmas wouldn’t be the same if he wasn’t here with us,” Ms Cox said.

The children will spend two weeks in Ireland with their host families and a number of them will visit Áras an Uachtaráin on Wednesday where they will meet president Michael D Higgins.

“It is so fitting that at Christmas time our president is opening the doors of Áras an Uachtaráin...not just to Irish citizens but to children who live in a mental asylum who aren’t valued in their own society. I think it is what Christmas is all about: that sense of belonging, that sense of family, that sense of love,” said Ms Roche.

“The benefits of that psychologically and emotionally are unquantifiable because it gives them a possibility of hopes and dreams for the future.”

Many of the children visiting Ireland come from some of the areas worst affected by radiation from the 1986 Chernobyl nuclear disaster and suffer from genetic disorders and congenital disabilities as a result.