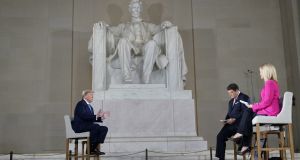 US president Donald Trump discussing his Covid-19 response with Fox News hosts Bret Baier and Martha MacCallum, broadcasting from inside the Lincoln Memorial in Washington, on Sunday. Photograph: Joshua Roberts/Reuters

US president Donald Trump will fly to Arizona on Tuesday to tour a mask production facility, as states across the country continue to reopen following weeks of lockdown.

More than 30 states have begun to lift restrictions introduced in the wake of the coronavirus pandemic, though the death toll from the virus continus to rise in the US.

Colorado, Florida and Missouri were among the states that relaxed some social distancing measures on Monday. In Florida, some beaches were reopened while restaurants, stores and nonessential businesses were also permitted to resume operating with social distancing directions in place. In Indiana social gatherings of up to 25 people are now permitted.

Mr Trump’s visit to Arizona will be the first time he will tour a facility connected with the coronavirus outbreak since it shut down large parts of the US in March. Vice-president Mike Pence has been undertaking trips in recent weeks in a bid to showcase American industry’s efforts to adapt to the manufacturing demands of coronavirus.

Mr Pence apologised at the weekend for not wearing a face mask during a visit to the Mayo Clinic in Minnesota last week despite the fact that the health facility had informed Mr Pence’s team in advance that face masks were obligatory. His action was widely criticised, and he wore a face covering when he visited a GM factory two days later.

As the death toll topped 67,000 in the US, it emerged on Monday that an internal report prepared by the Center for Disease Control and Prevention has forecast 200,000 new cases each day by the end of this month. It also projects that the death toll will continue to increase, reaching 3,000 a day by June 1st. The White House dismissed the report, noting it was “not reflective” of any of the modelling done by the coronavirus task force.

Nonetheless, Mr Trump himself has revised upwards his estimate for the number of deaths that will be caused by the virus.

Speaking at a Fox News event at the Lincoln Memorial on Sunday, he predicted that between 80,000 and 90,000 people in the US would lose their lives from Covid-19 – higher than the estimate of 60,000 he previously quoted.

Mr Trump also said he was “very confident” there would be a vaccine for coronavirus by the end of the year.

The toll the pandemic is wreaking on the US economy was illustrated on Monday as fashion retailer J Crew filed for bankruptcy.

While the company had been showing signs of strain before the pandemic, its troubles reflect the challenges many retailers are facing in the face of the coronavirus outbreak which has shut stores across the United States. The company, which had revenues of $2.5 billion (€2.3 billion) last year, but debts of about $2 billion, operates approximately 500 stores across the US. About 11,000 of its 13,000 workers had already been furloughed before it filed for bankruptcy on Monday.

Separately, in an unprecedented move, the US supreme court heard oral arguments by phone on Monday for the first time in its history.

Two members of the nine-member court are over 80 years of age and deemed to be at risk from the virus.

The Senate, however, reconvened on Monday for an in-person session, though social distancing rules were applied. The House of Representatives – the larger of the two chambers in Congress – is in recess, though Republican members have argued that the House should meet in person, resisting calls by Democrats for members to work remotely.