Opposition criticises new rules, which include a ban on the sale of alcohol 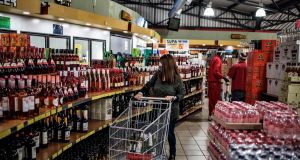 The South African government’s decision to reinstate sweeping lockdown measures to curb the spread of coronavirus has been strongly criticised by many businesses and the main opposition party.

On Sunday evening president Cyril Ramaphosa announced the immediate reimposition of a ban on the sale of alcohol, the reintroduction of a night-time curfew and the mandatory wearing of face masks as South Africa’s Covid-19 infections surged past one-quarter of a million cases.

Despite the introduction of these measures, the country remains on level three of its five-stage risk-adjusted lockdown system, which has allowed millions of people to return to work.

Mr Ramaphosa, the leader of the African National Congress-led government, said his cabinet had taken the decision to add new measures because so many South Africans were behaving recklessly.

“In the midst of our national effort to fight against this virus, there are significant numbers of people who have taken to organising parties and walking around in crowded spaces without masks,” he said.

Experts advising the government on Covid-19 have projected the disease could claim up to 50,000 lives in South Africa by December if the correct safety measures are not adopted.

Sunday’s Covid-19 update for the country put the number of confirmed cases in South Africa at 276,242 and the death toll at 4,079. A total of 12,058 new infections had been recorded in the previous 24 hours.

Mr Ramaphosa said: “We should be deeply concerned that a quarter of those that have died [from the virus] passed away in the last week.”

The president went on to say there was clear evidence the resumption of alcohol sales in early June had resulted in substantial pressure being put on hospitals due to car accidents, violence and related trauma.

Many South African hospitals are struggling to cope with the numbers of Covid-19 patients, media reports have shown, but the government is adamant the country still has enough bed capacity for the seriously ill.

The main opposition Democratic Alliance (DA) said the new restrictions were a distraction from the state’s failure to properly prepare the healthcare system for the peak infection period, which it is anticipated will run from now until early September.

According to the DA, only two of South Africa’s nine provinces – the Western Cape and the Eastern Cape – have up-and-running field hospitals, which the government said in late March would be established to handle any overflow of patients from the state’s established medical facilities.

“These ineffective gimmicks [the new restrictions] are an attempt to obscure the truth of our situation: the national government has completely and utterly wasted South Africa’s long and crippling lockdown,” said DA leader John Steenhuisen.

Associations representing the alcohol industry argue the new liquor ban is not the answer to slowing Covid-19 infections, saying it will just give rise to a black market and cost thousands of jobs in the sector.