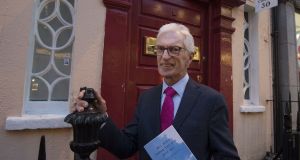 Staff at Cúnamh Adoption Services, formerly known as the Catholic Protection & Rescue Society of Ireland, have spoken of their “sadness” and “huge disappointment” at its closure after 106 years.

The new Adoption (Information and Tracing) Bill, once enacted, will vest all future rights and responsibilities for adoption information and trace services solely in State agencies.

In light of this, Cúnamh announced in March 2018 that it was to close at the end of this year. Its files were transferred to the Adoption Authority of Ireland in mid-December, and it ceased operations on December 20th.

Cúnamh chairman Tom Young said “the sadness is the fact that we were not able to successfully influence the direction of the draft Bill to enable us or an organisation like us to continue to provide the services we do on a professional basis”.

“We would have been happy for that to be done on the basis of a service agreement with, for example Tusla, who could be responsible for having oversight of us, making sure that we were operating to the appropriate standards. Bear in mind we are regulated and have been regulated and accredited by the Adoption Authority of Ireland.”

Julie Kerins, secretary and principal social worker at Cúnamh, said it was a huge disappointment that they could influence the legislation .

“I think we were doing it to the best of our ability and I think it’s also important there would be a choice of service provider out there.”

With the agency since 1992, she pointed out they had been regulated since legal adoption came in in 1953.

“And we had to become accredited again under the 2010 Adoption Act. So I think we’re good at what we do and we’re passionate about what we do and I suppose at the end of the day a decision was made and then it was about looking at who was going to take our service.”

She said the one positive was that service provision was going to be given and it was “not just about the transfer of records”.

“That’s very satisfying, that we can say to our clients yes, you will receive a service. It will be continued,” she said.

The agency had 10 staff, some part -time, seven social workers, three in administration.

As to whether there was a role for them in the new context, she said, “that would be up to the service providers , if they were to look in terms of taking on staff. I would like to think that they would, because we have a lot of experience here and it would be a shame to lose that experience.”

Ms Kerins said she was “very fortunate and honoured” recently to have had a reunion between a birth mother and her daughter.

“The daughter is now 25 and I worked with that birth mother when she was pregnant. So I actually have had a relationship with her for 25 years,” she said.

“She has found it extremely difficult that this agency is not going to be here for her. She says that if she needs a service in the future it will be like starting all over again with somebody new, which would be difficult.”

The agency had been “actively working in over 530 cases this year”.

“You are talking about big numbers of people. We would also work inter-agency, in that some natural mothers will have placed more than one child for adoption and possibly through different agencies. So we would be liaising on behalf of our client with maybe social workers in Tusla and maybe other accredited agencies and the Adoption Authority,” said Ms Kerins.

Cúnamh had been “part-funded by the State” and received charitable donations.

“As a staff we always did fundraising, and our clients, parents and children, they have been wonderful. Every penny that came to us was used to provide the service,” Ms Kerins said. Funds left over will be distributed in accordance with charities regulation and with the approval of the Charities Regulator.

Set up by lay people with the backing of the Church in 1913, the agency was initially concerned about the babies of Catholic women ending up in Protestant homes.

“It was an anti-prosleytising agency, about protecting a faith, but I think it was quickly about trying to supply support for families and sometimes it was about financial support to keep families together,” said Ms Kerins.

In her own time with the agency “it was always about care” and about “seeking homes here in Ireland for the children who needed those homes”. It was never involved in inter-country adoption.

As to why this happened, she said she didn’t know.

“Literally overnight it meant that we had to transfer that adoption assessment service to Tusla or the HSE as it was. The State took over that role.”

However the agency had been “ very successful” in relation to reunions.

“We had 111 reunions this year and since 2000 would have over 1,700 reunions. It isn’t always about a reunion for some people, it’s about information. It’s about knowing who they are and where they come from and if a birth parent is deceased it’s then hoping to make a reconnection with other relatives,” she said.

Mr Young recalled how at a final Cúnamh board meeting “the one thing we all had in common was a passionate interest in adoption”.

“I think everybody at the table had a connection with adoption on a personal basis. I have two adult children who were adopted from Cúnamh.”

They had an open day recently to which social work colleagues in the adoption sector from around Ireland, who had worked with Cúnamh over the years, were invited.

“When I came into the room the very first person I saw was Ms Anne Ronayne, who is now in her late 80s. She was my social worker - to myself and my wife - and processed our two children. She was the principal social worker at the time and effectively the chief executive (of Cúnamh),” Mr Young said.