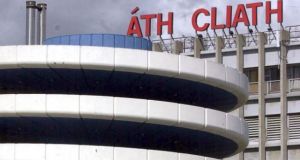 The daa denied any breach of the Equal Status Act but offered to reimburse the man for the missed flight and any further expenses he incurred. File photograph: Alan Betson

The daa, formerly Dublin Airport Authority, has been ordered to pay €1,000 in compensation for discriminating against a deaf man who missed a flight at Dublin airport during Storm Ali.

Micheál Kelliher told the Workplace Relations Commission (WRC) he was waiting at the airport to board a flight to Toulouse on September 19th last year.

The date coincided with Storm Ali and Workplace Relations Commission adjudication officer Jim Dolan who made the ruling in Mr Kelliher’s favour said the situation at the airport was “chaotic” due to atrocious weather conditions. There were significant delays to flights.

Mr Kelliher stated that the monitor for any changes on the Toulouse flight wasn’t updated “and the announcement on the gates being changed was made through the tannoy. I’m deaf and I didn’t hear it. So, I missed the flight”.

Mr Dolan said he was “satisfied that the complainant was treated differently to his fellow passengers who have no hearing impairment”.

However he was satisfied too there was no malice on the part of the daa “and it is possibly debatable whether the incident was foreseeable or otherwise”.

At the WRC hearing, the daa denied any breach of the Equal Status Act but stated it was unhappy Mr Kelliher had such a negative experience at the airport. After receiving an official complaint from him it offered to reimburse him for the missed flight and any further expenses he incurred as a result of missing the flight and Mr Kelliher accepted this offer.

It also provided Mr Kelliher with a €200 voucher as a gesture of goodwill and proposed he attend the airport to provide advice on how the daa might improve its services for passengers with hearing impediments in future. Mr Kelliher took up this offer and met staff on April 25th.

The daa told the WRC its practices and procedures at the airport are sufficiently adequate to accommodate the needs of people who have hearing impediments.

It said Mr Kelliher told staff at the April 25th meeting he chose not to walk to the airline monitors at the boarding area to check the status of his flight as there were a limited number of seats available and he wanted to keep his seat.

It submitted that it is very rare that any passenger could remain in his/her seat and not have to move to check monitors for up to date information.

Mr Dolan ordered the daa to pay Mr Kelliher €1,000 compensation for discriminating against him under the Equal Status Act.