Church leaders in Donegal call for retention of Eighth Amendment 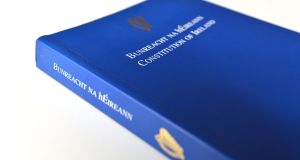 Church clergies and laity in Donegal are urging fellow Christians to work for the retention of the Eighth Amendment to the Constitution. Photograph: Alan Betson / The Irish Times

A group of 26 Protestant evangelical church leaders in Donegal have called for retention of the Eighth Amendment to the Constitution.

In a statement they said that “as a group of leaders and church workers from a variety of Christian churches in Donegal we believe that we have a moral and biblical duty to uphold God’s standards and to speak up for those who cannot speak for themselves.

“As leaders in our churches we are to lead by example in calling others to do likewise. We hold that all human life is precious.”

They said, “As a nation our history shows that we have failed mothers and babies. We have created stigma and shame instead of creating an environment of grace and love.

“We need to do better – better at compassion, better at support from conception, better at alternatives like adoption. But our past failings do not give us the right to determine who should be born and who should not.”

The right to life is the basis of all rights and liberties. To deprive the unborn child of this right would be gravely unjust

They urged “our churches’ members and our fellow citizens to resist this misguided call to repeal the Eighth Amendment”.

Signatories include Church of Ireland, Presbyterian, Methodist and Baptist clergy as well as ministers of smaller Christian denominations.

Meanwhile, a group of 10 laymen and laywomen from the Catholic, Church of Ireland, Presbyterian and Methodist churches in Donegal town have issued a similar statement calling for retention of the Eighth Amendment.

“The destruction of life in the womb ‘for any reason or none’ up to an arbitrary point in gestation, eg 12 weeks, is unacceptable,” they said.

They noted how “the Supreme Court has ruled that the only constitutional protection that the child in the womb possesses is enshrined in the Eighth Amendment which makes retention of the amendment vitally important.

“We therefore call on our fellow-citizens to honour the pledge we have already given as a nation and by a large majority to protect both mother and child. The right to life is the basis of all rights and liberties. To deprive the unborn child of this right would be gravely unjust.”

They called on the Government to increase supports and services for expectant mothers, “especially for those in a crisis pregnancy and for families with disabled children”.

In conclusion, they urged “fellow-Christians in towns, villages and rural areas throughout the country to work together for the retention of the Eighth Amendment.”

1 President Higgins says British must face up to their history of reprisals
2 Wife not entitled to deceased husband's entire estate, High Court rules
3 Life in Level 3: What will happen under new restrictions in Dublin?
4 Coronavirus: From midnight Dublin will move to level three until October 10th - Taoiseach
5 Why are some in Fianna Fáil unhappy with Micheál Martin?
Real news has value SUBSCRIBE