Government may not be able ‘to pass abortion legislation’ 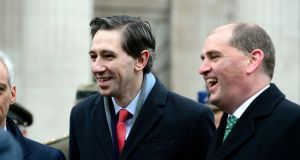 Minister for Health Simon Harris pictured after a 1916 commemoration ceremony on Easter Sunday, at the GPO in Dublin. Photograph: Cyril Byrne/The Irish Times

Minister for Health Simon Harris has said he cannot guarantee that legislation allowing for abortion would be passed by the current Government in the event the Eighth Amendment is repealed.

A referendum on repealing Article 40.3.3, also known as the Eighth Amendment, is to take place on May 25th. The Amendment gives an equal right to life to the mother and the unborn.

If the referendum is passed, legislation would then be introduced to allow for unrestricted access to terminations within the first 12 weeks of pregnancy.

Speaking at an event in Dublin on Sunday, Mr Harris said it was his hope that new legislation on abortion would follow soon after the referendum and that it would be in place by the end of 2018.

However, he acknowledged that the timing of the next general election could be an issue, and that the legislation should not be rushed.

Mr Harris said: “Subject to everyone honouring what they have signed up to in terms of [the] confidence-and-supply [agreement], I expect we could get the legislation passed.

“But the timing of a general election is a matter for quite a few people, and publicly everyone is saying they are committed to confidence-and-supply. I know my party certainly is. I am sure the Fianna Fáil party is.

“If there is a genuine commitment from all sides . . . it should provide adequate time. But it is also important that the Oireachtas takes its time to get it right and scrutinise the legislation.”

If voters choose to repeal the Eighth Amendment, the Protection of Life During Pregnancy Act, which allows terminations only when a woman’s life is at risk, will remain the law until new legislation is passed through the Houses of the Oireachtas.

If the Amendment is repealed, the Government has proposed introducing a Bill to allow for access to terminations within the first trimester of pregnancy and in specific circumstances beyond that.

Mr Harris said there would be an obligation on all TDs and Senators to implement the decision of the people.

Asked if he believed the actions of Simon Coveney in recent weeks had damaged the Government’s campaign for repeal, Mr Harris insisted that the Tánaiste had acted honourably.

Mr Coveney confirmed this week he would support laws to allow for terminations within the first 12 weeks of pregnancy, despite initially being opposed to the proposition.

His change of mind was criticised by the anti-abortion campaign.

Mr Coveney said his support for the Government proposal was conditional on additional safeguards being included in the legislation.

Mr Harris said Mr Coveney had teased the issues through and was satisfied the proposal was the best way forward.

Meanwhile, the Save the 8th campaign criticised comments by Fine Gael Senator Catherine Noone on Twitter concerning Mass in Knock, Co Mayo, on Easter Sunday.

The Senator had tweeted that during the service “ an octogenarian priest took at least three opportunities to preach to us about abortion – it’s no wonder people feel disillusioned with the Catholic Church”.

The tweet was criticised by Save the 8th, which claimed it was an ageist remark. Ms Noone has deleted the comment.