Myths and lies about abortion must be debunked 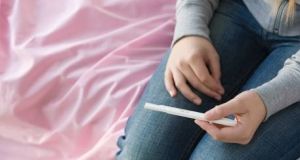 “It’s worth noting the sanctimonious gloat that ‘Ireland is abortion-free’ is a sinister fiction. It ignores the fact that roughly 12 women travel to the UK for abortions daily, while others procure abortificants online.” File photograph: Getty Images

Abortion has long been a contentious issue in Ireland, replete with emotive and frequently dubious rhetoric. This was recently exemplified by Save the Eighth billboard campaign featuring an abortion nurse detailing the horrors he had witnessed.

This testimony was somewhat undermined by the revelation it had been fabricated, leading to the unedifying sight of campaign manager John McGuirk rapidly pivoting from legal threats to grudging acceptance, a volte-face hard to distinguish from surrealist performance art. As the referendum looms ever closer, it is inevitable campaigning will become more charged, both online and off.

Previous abortion referendums have been ugly affairs, characterised by vicious campaigning. The stellar work of the Citizens’ Assembly has shown us this needn’t be the case

As with the nurse-who-wasn’t, much of this will be sound and fury, a storm of half-truths and disinformation. Perhaps most odious are the claims abortion leads to depression and even suicide. Anti-abortion campaigners frequently allude to this outcome, dubbing it post-abortion syndrome (PAS). But while this has been a staple of anti-abortion arguments since 1981, it is simply not borne out in the ample scientific literature on the topic. A study of 365,550 Danish women found absolutely zero elevated risk of suicide or depression in the 23 per cent of the sample who’d had terminations, echoing the results of numerous other schematic reviews over decades. PAS is a myth, explicitly dismissed by numerous professional bodies, including the American Psychological Association, the American Psychiatric Association and the Royal College of Obstetricians and Gynaecologists.

Contrary to PAS assertions, the emotion most commonly reported by woman after an abortion is relief, not depression. Similarly, claims that abortion could cause cancer or impact future fertility are utterly rejected by medical bodies, including the World Health Organisation. Debunking these myths appears a Sisyphean task. Each abortion debate sees them emerge with zombie-like imperviousness. Certainly for me, this has a distinct feel of repetition, as I covered precisely these myths for this paper in 2012 following a Youth Defence campaign reliant on the same tired tropes. In the intervening years they’ve cropped up with depressing regularity, lending a veneer of compassion to anti-abortion stances. But such ostensible concern is somewhat undermined by the fact these claims are nothing more than long-discredited, scaremongering.

For this referendum, the issue of time limits looks poised to become a key battleground. Already some are insisting a repeal of the Eighth will open the floodgates to late-term abortion. The insinuation that the foetus feels pain is the most inflammatory of all anti-abortion arguments, and pro-life imagery has long depicted termination a brutal affair. But this is so much bluster – the vast majority of abortions in Europe take place before nine weeks, and are medical in nature, using compounds such as mifepristone to induce miscarriage. Only 1.6 per cent of UK abortions occur beyond 20 weeks, typically the heart-breaking consequence of fatal foetal diagnoses. The neuroanatomical machinery required for sensation isn’t completed until at least 26 weeks’ gestation, far beyond the upper worldwide time limits. Early-stage foetuses lack the developed nervous system and brain to even be aware of their surroundings, let alone feel pain. As the Eighth Amendment Committee has recommended a 12 week-limit, the fixation on late-term abortion is a complete red herring.

It’s also worth noting the sanctimonious gloat that Ireland is abortion-free” is a sinister fiction. It ignores the fact that roughly 12 women travel to the UK for abortions daily, while others procure abortificants online. This isn’t surprising – medical evidence suggests that termination rates are approximately equal in countries with and without legal abortion. Regions with limited abortion access do however have markedly higher incidences of unsafe abortion, killing 47,000 women a year worldwide. Legal barriers have never dissuaded anyone from seeking terminations, instead only adding emotional and financial obstacles to an already difficult decision.

One might reasonably ask whether there are similar pro-choice myths. In this campaign the groups advocating for repeal have quite admirably stuck to the facts, citing the Joint Oireachtas Committee report and expert testimony to make their case. Repeal campaigners have largely steered clear of incendiary language, though as Nell McCafferty noted in her thoughtful piece last week, referring to a foetus as a clump of cells isn’t helpful given all humans could be defined similarly. Whether someone views an early foetus as a baby or a cell cluster is likely related to whether they consent to being pregnant or not, and pro-choice advocates leave that decision to the individual concerned.

There is a crucial but subtle point here that might explain the asymmetry of dubious information. One can be utterly opposed to abortion on a personal level, and yet still be pro-choice. The converse however is not true – pro-life advocacy enforces a particular moral position on others. Coverage of the abortion debate usually frames pro-choice views as the opposite extreme, but this is intrinsically false equivalency given pro-choice advocates do not seek to impose their morality upon others. A pro-life position is a specific moral viewpoint, not an evidence-based conclusion. The emotive factoids and narratives marshalled in as support are post-hoc justifications, designed not to inform, but to evangelise. As Fintan O’Toole recently warned, a “fake-news” anti-abortion firestorm is headed our way.

None of this is to denigrate those who are pro-life; it’s entirely understandable that people have ethical or religious objections to abortion. If one sincerely believes that abortion is murder, it follows they would endeavour to oppose this. There are philosophical discussions to be had about how and when we define life, and differences of opinion ought to be respected. But while we are entitled to our own opinions, we are not entitled to our own facts. Resorting to outright fabrication to support a moral position is not only cynical, it suggests those bending the truth don’t truly have much confidence in the strength of their position.

Previous abortion referendums have been ugly affairs, characterised by vicious campaigning. The stellar work of the Citizens’ Assembly has shown us this needn’t be the case, illuminating how compassion and reliable information can lead to informed consensus. If we are to follow this lofty example, it is imperative that we not allow odious falsehoods take the place of reasoned discussion.

Dr David Robert Grimes is a physicist, cancer researcher and science writer at Queen’s University Belfast and University of Oxford