Iona Institute has no objection to sexual consent classes

Should be age appropriate, keeping in mind parents as primary educators 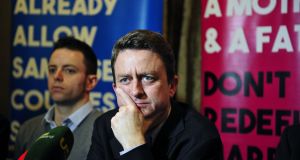 Director of the Iona Institute, David Quinn, said he hoped as well as being taught what proper sexual consent is, children would also learn to get to know and like each other properly first. File photograph: Aidan Crawley

The Iona Institute, which promotes traditional family values, has no objection in principle to the review of sex education in schools, announced by Minister for Education Richard Bruton. It proposes that primary schoolchildren be taught about sexual consent.

Director David Quinn said the Institute had “no objection in principle, always keeping in mind that parents are the primary educators, with the schools as back-up.” He hoped that “as well as being taught what proper consent is, the children would also learn to get to know and like each other properly first”.

At primary level, he said he would hope this would not be before sixth class and that it would be taught in an age appropriate way. He also said “the ethos of the school has to be taken into account”.

In that context he believed “the sooner divestment takes place , the better.” It would mean Catholic schools being handed over to non-Catholic boards of management.

“The Church needs to get ahead of the game and put into place plans for much speedier divestment. It would mean less pressure on Catholic schools and offers parents choice,” he said.

The Church, he said, “needs to get together with other community leaders and sell the idea of divestment”.

Meanwhile, the Education Equality group has called “urgently” on the Government to eliminate religious discrimination in schools’ access and to compel schools to confine religious instruction to a period at the end of the school day.

Education Equality campaigns for equality in education regardless of religion and an end to religious discrimination in State-funded schools.

Referring to Central Statistics Office 2017 figures on marriages in Ireland, published last week, it noted the number of couples choosing to be married in the Catholic Church continued to decline, accounting for 52.8 per cent of Irish marriages in 2017.

This demonstrated “the growing number of non-religious families, who are among those most disadvantaged by school admissions policies that prioritise children from particular religious backgrounds over others when enrolling students”, it said.

Education Equality chair April Duff said, while in Ireland “well over one-third of Irish couples chose non-religious marriage ceremonies in 2017”, it remained the case that access to schools “compels non-religious parents to pragmatically baptise their children contrary to their own beliefs in order to ensure a place in their local school”.

This, she said, was “unacceptable discrimination in a modern, pluralist republic”.